Drones are becoming big business. And now students who want to learn more about the field can minor in Drone Applications at Southern.

The minor pairs journalism and geography courses to provide different perspectives of drone use today. The first classes toward the minor are now being offered. 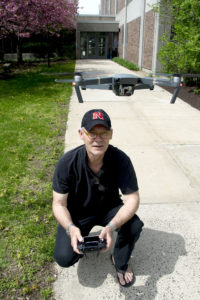 Vern Williams, an assistant professor of journalism at Southern, has already offered a special topics course on Drone Journalism twice. First offered in Spring 2017, it was the first drone journalism course offered in Connecticut, and helped pave the way for the development of the minor.

Williams, one of the first people in Connecticut to become licensed to fly drones commercially, has built credentials as a drone journalist. He was a member of the inaugural Drone Journalism Boot Camp held at the University of Nebraska-Lincoln, powered by Google News Lab, in August 2016. He has spoken to journalists, students and the public about the technology and ethics behind drone journalism in Connecticut and New England. His own drone photography has appeared in the New Haven Register and the Connecticut Health Investigative Team, among other publications.

Williams will teach the Basic Drone Technology course along with Scott Graves, an associate professor in the department of Environment, Geography & Marine Sciences.

Graves brings his own extensive experience with drones. Since 2010, he has been experimenting with aerial photography for environmental research, switching from kites and balloons to drones. He has donated several drones to Southern for use in geography classes and research.

In 2015, Graves was awarded NASA Space Grant funding to explore the Feasibility and Utility of µUAS (micro drones) for conservation mapping of select Connecticut coastal forests and wetlands. That research produced a number of detailed Orthomosaic Image/Maps with accompanying Digital Surface Models which have been presented at a variety of local, regional, and international conferences and symposia.

Graves employed structure-from-motion techniques to render the large mosaic images and 3D models from a series of individual downward-looking images collected during µUAS flights. The combination of low altitude µUAS/drone imagery and structure-from-motion has rapidly become a new industry standard technique for aerial surveys of a wide variety of landscape scenarios. Those include geologic and mining research, archaeology, forestry, wetland studies, and beach and infrastructure mapping.

Graves continues to pursue µUAS and SfM aerial mapping and hopes to eventually make it a regular part of coastal research methodologies here at SCSU. Most recently Graves wrote a book chapter exploring µUAS/SfM as a more precise way of gathering landscape data for use in predictive models of coastal wetland responses to the threat of future Sea Level Rise.

Students can then select two courses from the following electives:

Students in the program should be able to take and pass the FAA license exam to become a credentialed drone operator.