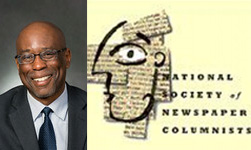 Frank Harris III, professor of Journalism, won third place in the National Society of Newspaper Columnist Contest, in the General Interest, over 50,000 circulation category for a series of columns on the N-Word.

Harris’s column appears every other week in the Hartford Courant.

In addition to the columns, he has been researching the evolution of the N-Word in American news media. He recently produced a documentary about the word. Harris’ interviews with people from across America about their use of the word can be viewed at his website.

Winners of the contest were announced at the annual convention for the National Society of Newspaper Columnists in Los Angeles in June. NSNC “promotes professionalism and camaraderie among columnists and other writers of the serial essay, including bloggers,” according to the group’s website.

Harris published a book of his columns called “In My Own Words,” and has previously won awards for his work from the Connecticut Society of Professional Journalists.