Melissa Nunez, a journalism student at Southern Connecticut State University, reported this story as part of Journalism Capstone coursework on World War I. 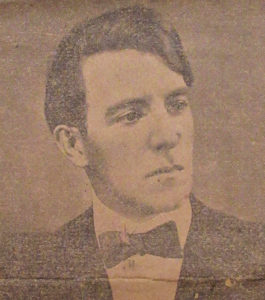 A portrait of Guy Hedlund from 1918. Photo credit, the Connecticut State Library.Filmmaker and Portland, Connecticut native Guy Hedlund could not serve in the First World War, yet he wondered what else he could do to contribute to the war effort.

That contribution came in the form of moving images, according to an autobiography Hedlund wrote in March 1923.

During the war, Hedlund produced “Connecticut at War,” a series of episodes representing Connecticut as it related to the conflict, according to an article featured in the Sunday Post titled “War film director has had a career of thrills.”

Hedlund said he wanted nothing more than “to take part in one of the greatest adventures of the world’s history that was being staged in [his] backyard,” and he found preserving memories of the conflict to be rewarding, according to his autobiography.

“Immediately there appeared to me the great possibilities of the motion picture,” said Hedlund, “to depict for the moment the noted personages and stirring incidents taking place throughout the nation and the state.”

While Hedlund’s films are currently not on file at the Connecticut State Library, articles and other resources relating to his films helped describe their context.

After his war film proposal was rejected by the State Council of Defense for funding, Hedlund said he found financial support through donations from newspaper editors throughout Connecticut, by mortgaging his farm and taking on a partner, Charles Northam, and acquiring about $1,600.

Initially “Connecticut at War” made little revenue, prompting Northam to sell his interest to Bridgeport resident, William Sheehan, who showed the films to a larger audience in Bridgeport and again in New Haven to an audience of 2,500, according to Hedlund’s autobiography.

Hedlund went onto direct and narrate “The Hun at our Doors,” a prohibition film pushing for alcohol reform during World War I.

While activism, such as prohibition, started before the Great War, those efforts were halted to focus on the conflict, said Christine Pittsley, Connecticut State Library’s Remembering World War I project director.

Although, Hedlund’s plea for prohibition related directly to the war, Pittsley added, arguing soldiers could not efficiently fight if they were drunk.

Later Hedlund went onto direct “Making of an American,” a film encouraging immigrants to take Americanization classes. Despite the film being produced after the Great War in 1920, its concept came as a direct result of the war, said Pittsley.

“It was thought that, you came here, you became an American,” said Pittsley. “It probably had to do with the patriotism that was expected of people through World War I. Everyone you encountered told you [that] you needed to be doing your bit. I think being an immigrant in those sorts of surroundings, doing your bit meant becoming an American.”

Hedlund said fame was not his intent in creating these films—rather they were a symbol of his duty to his country, according to his autobiography.

“In [the future] when the pictures are shown, surely applause and congratulation are of small interest to one on the brink of the grave,” said Hedlund in his autobiography. “No, I simply wished to satisfy a distinct personal ambition to do my ‘bit.’”

To see more about the life and career of Guy Hedlund, please clink the link here.

To see a brief clip of “Making of an American,” please click the link here.