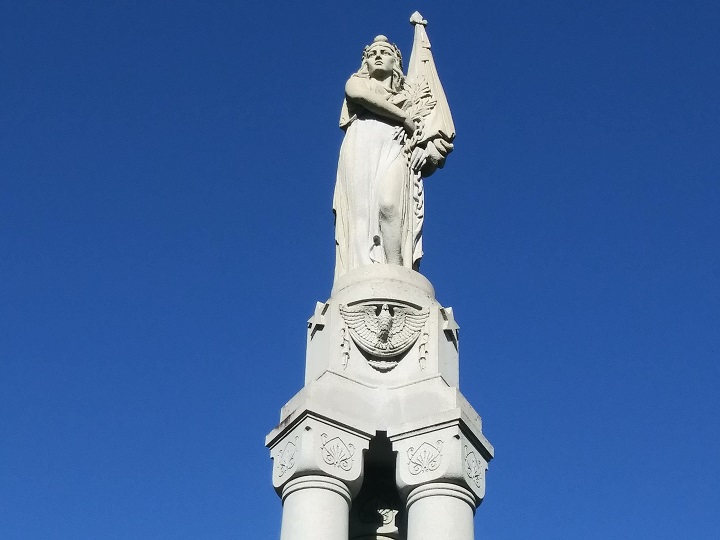 Victoria Bresnahan, a journalism student at Southern Connecticut State University, reported this story in 2018 as part of Journalism Capstone coursework on World War I.

The original intention of the Newtown World War I monument was to glorify peace, said town Historian Dan Cruson.

“[With] many war memorials you put a tank on the green and that’s a very militaristic approach to the whole business,” said Cruson, in an interview. “It kind of glorifies the war aspect of it; this [monument] tends to glorify the peace aspect of it.” 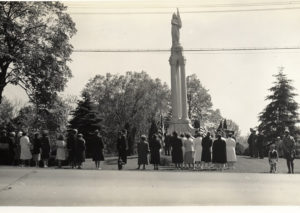 Newtown’s Liberty and Peace monument circa 1931, shortly after it was erected. Photo: Victoria Bresnahan

However, originally named “Liberty and Peace,” according to the monument’s blueprint, the title and meaning has changed since its erection in 1931. The structure, which is located on a triangular piece of land touching Main Street, and Schoolhouse Hill and Hanover roads, is now more commonly known as the “Soldiers and Sailors” monument.

This is due to the six bronze plaques around it inscribed with the honor rolls of those who served—including the 138 names of the soldiers and sailors active in WWI, Cruson stated in his book “Newtown: 1900-1960.”

Cruson has attempted to change the name back to its original, “Liberty and Peace,” through his writings since he discovered the information on the monument’s blueprint.

“The memorial was originally meant to be called the ‘Liberty and Peace Monument,’ ” stated Cruson in a 2004 Rooster’s Crow, the Newtown Historical Society’s newsletter, “a much less militant moniker than the ‘Soldiers and Sailors Monument.’ ”

Erected 36 feet high, the granite Lady Liberty on top stares out in the southwest direction. She possesses a speared flag, olive branch and chain. 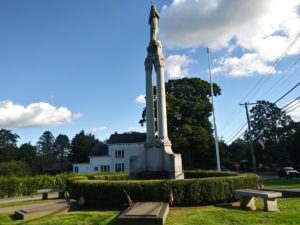 The monument was a requested provision in the will of town benefactress, Mary E. Hawley, and was commissioned at $25,000 in 1930. Construction began one year later.

“[Hawley] had already donated a town hall, a library was in the offing, she donated a high school,” said Cruson, during the interview, “so, I mean, her benefactions were incredible. The monument did not rank as the most noted contributions.”

The intent of the monument’s design was to strive away from war-time conflict, according to a 1931 Newtown Bee article. In addition, the monument’s creator, Frank Naylor, a memorial designer from New York, was selected over 27 others by a town committee, it stated.

“Any suggestion of arms and strife,” stated the article, “so common in many memorials of this type, has been carefully avoided because it was not the actual conflict that it desires to commemorate, but rather the spirit and idealism that prompted the sacrifice of thousands of youthful lives honor and principle.”

The monument was not dedicated until 1939 for unknown reasons, said Cruson. The dedication ceremony, however, was a large gathering for the community due to the presence of opera singer, film star and Newtown resident Grace Moore, said Cruson. The ceremony was the only time Moore sang publicly in Newtown.

Moore, Cruson said, was a celebrity of Newtown. Her home on Bradley Lane in Sandy Hook has been sold to different owners since Moore’s death in 1947.

“Her one performance in town was she sang at the dedication for the monument,” said Cruson. “The crowd was estimated at about 3,000 people and they all came basically to hear her sing because as soon as she finished everybody left. That was before they even laid the wreath at the monument and the rest of it.”

With each new war, a plaque is added, making the monument a “living memorial,” said Cruson.

“I think that the interest in the monument will continue, and it will continue to serve the purpose I think Mary Hawley originally intended,” said Cruson, “and that was focusing on what these [veterans] had given so much. It should be remembered.”