Brokk Tollefson, journalism student at Southern Connecticut State University, reported this story in 2017 as part of Journalism Capstone coursework on World War I.

What started as a small tribute to Eastford’s veterans from World War I and other conflicts, became the foundation of a larger, more extravagant memorial.

Using his own money, and many of his own resources, in 2013 Christopher Bowen, of Eastford, built a stone wall and laid pavers around the monument as a way of honoring his father’s World War II service.  The town added new military insignia plaques and a new flagpole to the site. 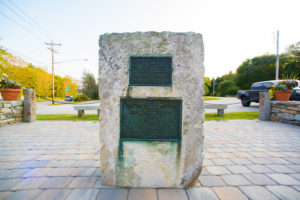 The monument, with one large stone, is located near the local library at the intersection of Eastford, Westford and Old Colony roads. On this stone are three plaques––one honoring veterans of World War II, one for World War I, and one for prior wars.  The main stone was originally placed in 1947, the centennial of Eastford, a town with a population of 1,751 in Northeast Connecticut.

The stone came from the Eastford property of Gen. Nathaniel Lyon, the first Union general to die in the Civil War.

“That is pretty amazing if you think about it,” said Rick Torgeson, a former first selectman and former selectman, who is in charge of maintaining the monument, “that one individual thought so highly of his father and the fact that he served and he wanted to honor the veterans, that he provided all the funding.”

According to Torgeson, the monument was not easy or cheap to make. The total cost of the monument came out to be $25,956.88.

The monument was rededicated on Nov. 11, 2013. Construction for the monument around the stone started a year before the rededication.

Nothing in the memorial was imported from locations outside of Eastford. 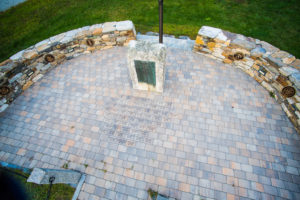 “Everything’s local. He built the wall, and boy was it hot that summer. But he suffered through it out here because there was absolutely no shade,” said Torgeson. “Everything was made by a local stone mason, local hands, local money, local materials, and for local veterans.”

After the monument was dedicated, the Veterans Committee was formed. With the exception of Torgeson, the committee is run by veterans, who meet once a year to discuss what changes or improvements need to be done.

“We assume the responsibility of the maintenance of the monument itself,” said Torgeson. “The town Public Works crew, which is just two people, handle the mowing.”

When they first built the monument, Torgeson, Bowen, and the Veterans Committee were concerned about people defacing the monument with trash or graffiti. Torgeson said they were happy to realize the monument has been well respected by everyone in the community.

“We do take care of it,” said Torgeson. “It has deteriorated because of weather, but it has maintained because of our interest in keeping it maintained.”

The committee has an account of $1,800 exclusively for the monument it acquired by selling pavers and from leftover seed money from when it built the memorial. The pavers are bricks in the foundation of the monument, which were paid for by families of veterans who wanted to put their names in the monument.

The monument has gotten a lot of attention by the locals. According to Torgeson, Claire Williams owns a local flower shop and she donates flowers to decorate the memorial every season. Ed Thompson, who owns Woodstock Valley Electric, installed the lights, which illuminate the flag and the monument at night.

“The kids come down here every year. They do a tour as a part of their social studies curriculum,” said Torgeson. “We want to pass this along to our kids. This is a great instructional tool.”

Every year, the monument is the main location for the Veterans Day celebration. Torgeson said the monument has been a great success with the small town.

“One of our goals was to create a place that people could come and enjoy being out on a day like today and sit, but also be reminded,” said Torgeson. “We try to make it so that when you sit here, you see the panorama of the different services and are reminded of those services.”