‘Telephones had circles with numbers from 0 to 9’ 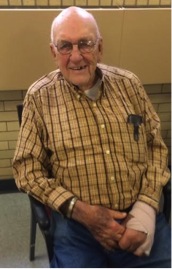 ‘Telephones had circles with numbers from 0 to 9’

NEW HAVEN — He would wake up at 3:30 a.m., 30 minutes before his day would start on the farm, 3-1/2 hours before he would eat his first meal of the day. Stomach rumbling due to hunger, Harvey Lockyer knew work came before anything, so breakfast wasn’t part of his morning routine until the farm was all set for the day to come.

Lockyer, who started working at the age of 7, back in 1933,on a farm on North Pease Road in Woodbridge Conn., would begin his day with his co-workers and a team of horses, milking cows and maintaining the farm for numerous years.

“Work was my life back when I was a young kid,” said Lockyer, who has lived in Woodbridge his entire 88 years. “Work was nothing to us because that’s what we always did. We would start the morning by milking the cows, plant the corn, put the hay up in the summer time, all with a team of horses. Then we would have breakfast at 7 a.m.”

The labor on the farm was hard, Lockyer said, but it had to get done because a lot of people relied on them (Lockyer and his co-workers) to have fresh milk and eggs each day. A dozen eggs would cost 35 cents and a quart of milk would be 16 cents, but he would leave the farming industry mid-way in World War II to join the Navy.

Seeing that both egg and milk prices have increased today, Lockyer said there have been two significant changes he has experienced in his lifetime: the development of the telephone and wag“We started to become more modern all the time,” he said once World War II ended. “Houses started to have new types of refrigerators and that was a change. Everything started to change. Before WWII, they didn’t build any cars for the civilian people to buy. So any car you bought those days were used car. Then finally after WWII, anybody can go buy a new car if they wanted to.”

Once The Great Depression and WWII ended, wages at this time were $1 an hour. When it came to making money, Lockyer said it started to pick up for a lot of people in America at this time. But it was what to do with the money that made people become more cautious with spending.

But for a small town like Woodbridge that had a population in the hundreds, entertainment would come just once a week for Lockyer. It is unlike today, where the town has, according to the 2010 Census, a population of roughly 9,000 residents. Woodbridge has filled empty spaces over the decades with numerous bars, gyms, stores, bowling alleys.

“There were good times too, but they were simple times. They were not like today. We had barn dances every Friday and Saturday night where all the boys and girls would go down to hang out. That was pretty much all the entertainment we had because it was mainly all farms in the area”

After the Navy, Lockyer was employed in numerous jobs which lasted an average of one to two years. In 1954, Lockyer settled in a field that he enjoyed: the telephone business.

Rotary telephone of days gone by.

Thinking back to the 1930s, telephones didn’t have a screen to show you what numbers were being dialed as they do today. In fact, Lockyer remembers in the 1930s, telephones had circles with numbers ranging from 0-9 with alphabets next to them, which was called “rotary telephones”. At this time, phone numbers consisted of two letters and three numbers unlike today, where a phone number consists of 11 numbers including the area code.

“As time went on,” said Lockyer, grabbing an iPhone on the table pointing out changes, “I would’ve never thought phones like this would even be possible. But they did come out with a portable phone. It was a phone, but it was made portable. When you took it outside you couldn’t talk on it. You had to go into a house and plug it in if you wanted it to work.”

–Lockyer is referred to by friends as Mr. Woodbridge–

The first portable phone came into existence in 1964, 18 years after the first mobile phone service AT&T began. Communication through telephones started to become much more convenient for people as time progressed said Lockyer, but the price for a phone call was a heavy coin.

“We had telephones,” said Lockyer. “We could call anyone with a telephone but we didn’t because it was very expensive to call. They charged by the minute. So a three minute call on a telephone would cost you a bit of money. People were more frugal in those days because we experienced a bad Depression and people remembered the Depression. People didn’t just throw money away.”

Lockyer would work in the phone business for the next 34 years, retiring in 1988 at the age of 62. During his 26 years of retirement, Lockyer would still go back to his childhood roots, which is the farming field where he enjoys growing vegetables in addition to traveling.

With much more free time, Lockyer said he has refused to learn how today’s smartphones work.

“I don’t feel,” he said, “there’s a need for me to try and learn about smartphones. I’m 88-years-old. What’s the point of trying to learn now?”