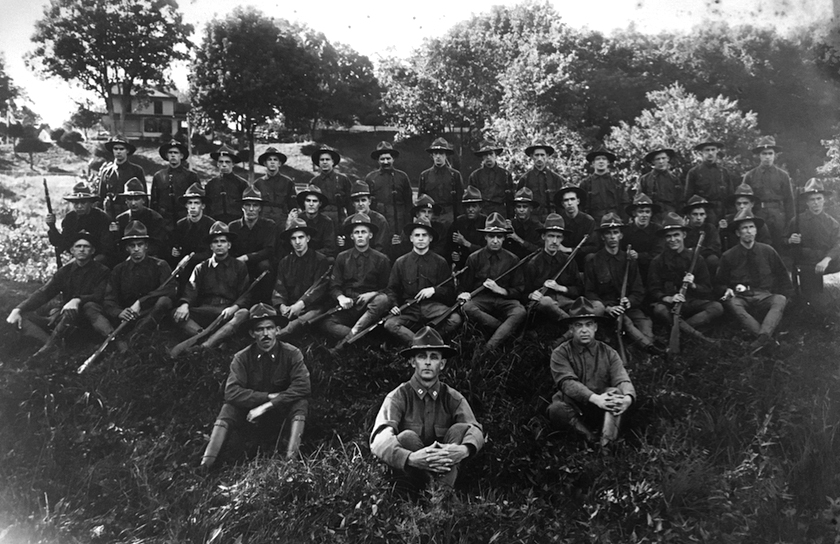 Jonathan Gonzalez and August Pelliccio, journalism students at Southern Connecticut State University, reported this story in 2018 as part of Journalism Capstone coursework on World War I.

Trepidation of enemy spies and potential threats to civilians’ home cities and towns was common after the United States entered World War I, according to Ben Gammell, exhibit developer at the Connecticut Historical Society.

“People even feared a lot of immigrants, recent immigrants who came from Europe, who might be loyal to their country instead of the United States,” Gammell said.

Connecticut’s response, he said, was the Home Guard.

“They were there to guard the home front,” said Gammell. “They were in charge of standing guard over railroads, factories, bridges.”

Furnishing men, money and resources left a hole in protection for cities like New Britain, which were doing otherwise “splendid work” in respect to war preparedness, according to a June 10, 1917 article in The Hartford Courant. 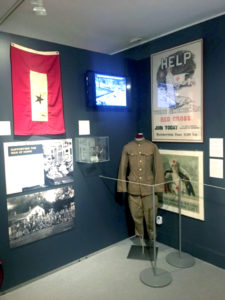 “The service of these young men who have joined [the military] does not leave their home city any more prepared,” stated the article. “Numerically speaking, [New Britain] is in a poorer state of preparedness than it was before they left.”

In early 1917, Connecticut factories manufactured 55.4 percent of the country’s ammunition and arms, Bruce Fraser wrote, in, “The Patriot Society, Cultural Absolutism in Connecticut.” Because the contribution to American military and allied countries was significant, he wrote, then-Gov. Marcus Holcomb was especially concerned about potential attack.

On March 9, 1917, Connecticut General Assembly met to discuss legislation creating a Home Guard, David Drury wrote, in, “Hartford in World War I.” A bill drafted by Hartford attorney Benedict Holden was approved unanimously, Drury wrote, and Holcomb immediately signed a law creating the Military Emergency Board, in charge of establishing a Home Guard.

Regulations for the Home Guard were published by the state of Connecticut as a reference for the Military Emergency Board.

Men between the ages of 16 and 60 were eligible to join, according to Fraser, and the original intent was to assemble 5,000 men. Double that figure had signed up by April 7, he wrote.

Home Guard officers retained civilian jobs, but were compensated with the same pay as an officer in active duty, according to Section 29 of the regulations. An archived Home Guardsman paycheck, at the Connecticut Historical Society library, shows a stipend of $107.98 for two months of service. According to the Bureau of Labor Statistics inflation calculator, that is worth $1,950.47 in 2018.

Home Guard was divided into three classes, according to Laura Macaluso, in, “New Haven in World War I.” The first was dedicated to protecting business properties, Macaluso wrote, the second to repairing infrastructure. The third was for men with physical limitations who could not serve in combat, she wrote. They would represent the military, aiding recruitment.

“All the young men actually went off to Europe,” Gammell said, “so a lot of the Home Guard members were older men who were too old to serve.” 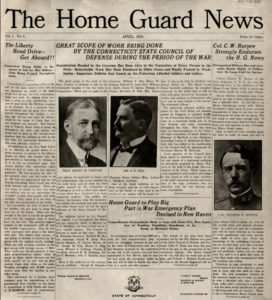 In New Haven, the Home Guard held an important role of fundraising, partly by way of a monthly newspaper. The Home Guard News reported on war news, but also local news related to fundraisers and liberty bonds. The first edition alone printed three full-page advertisements for liberty bonds, and several other, smaller advertisements.

On May 13, 1918, The Hartford Courant reported on a mock-attack, held to test the Home Guard’s capability. Five battalions disbanded an “invasion” of the Capitol, in front of an audience of thousands. Holcomb declared, despite one casualty, Connecticut was “prepared to meet disloyalty, should it break out.”

In some cases, the Home Guard was a stepping stone between civilian life and active duty.

The Hartford Courant reported on June 13, 1917, Connecticut’s Military Emergency Board circulated advertisements urging members of the Home Guard to enlist for active service in March of that year, and the effort proved successful.

“Let every man in the Home Guard who can or should be held for United States service honestly consult his conscience,” stated the advertisement, “without considering unduly his personal comfort and welfare and decide whether it is not his duty as a brave and loyal citizen to enlist at once.”

Almost 14,000 men responded to this call of duty by enlisting in the National Guard within three months, according to the article. Roughly 3,500 of the men were put into active force, or first line, the article stated.

A key concern was loyalty, Fraser wrote, in regard to the Home Guard. He referenced a speech by Arnon Alling, New Haven’s then state attorney.

“He that is with us, is with us,” said Alling, “and he who is not, may be against us and the government.”