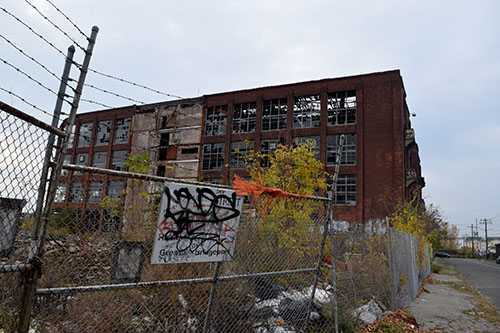 Sherly Montes, a journalism student at Southern Connecticut State University, reported this story as part of Journalism Capstone coursework on World War I.

One of the largest manufacturers during World War I was Remington UMC, then located in Enterprise Park Bridgeport, Conn.

Also known as the Remington Arms Co., now located in Lonoke, Ark., was once located in Bridgeport from 1866 until 1986.

The company was known for its specialization in metallic ammunition for pistols, rifles and shotguns, according to Remington’s website.

Remington produced ammunition and weapons from the Civil War to World War II. As the company expanded it added gun design and assembly to its production. 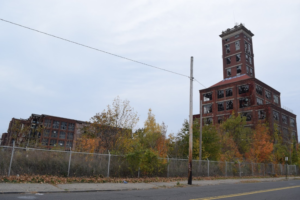 Photo of abandoned Remington Arms Company on East Side of Bridgeport, Conn. on Arctic St. and Helen St. Photo taken on Nov. 9, 2016 by Sherly Montes.

During its involvement with World War I, Remington produced arms for France, Britain and Russia. Once the United States entered the war, Remington also supplied its needs.

Remington was eventually bought out during the Great Depression and then moved to Arkansas. Remington is still in business today and it still produces ammunition, guns and rifles.

Today, the old Remington Arms Co. located on the East Side of Bridgeport — at the intersection of Arctic and Helen streets — comprises three abandoned and vandalized buildings. Previously other buildings were lost to fire and demolition.

Photo of abandoned Remington Arms Co. on East Side of Bridgeport, Conn. on Arctic and Helen streets. Photo taken on Nov. 9, 2016 by Sherly Montes.

What is left of the Remington Co. at Enterprise Park will not be there much longer as plans to build another train station in its place have been in the works and are waiting for approval by the City Council.