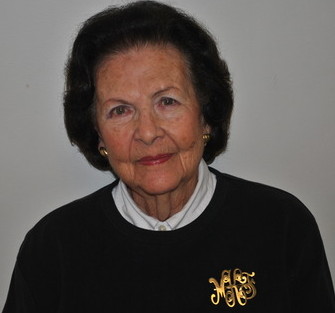 To this day, 87-year-old Mildred Klungman regrets not going to college.

“My generation catered to the men in our lives – our husbands and our sons,” she said.  Klungman was a homemaker her whole life and said that there is more equality to raising a family today. 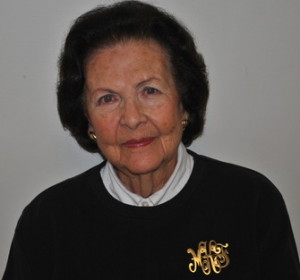 “I could have been anything I wanted,” she said. “I was a straight A student.”

When her granddaughters visit her in Florida where she now lives, she said when they go home, they have to “retrain their husbands.” Klungman has two children of her own and they are both boys.

“To get up from the table and get whatever they need all by themselves, and fill up their coffee by their selves, and refill their plates,” said Klungman. “Take care of this, do you need this? Do you want that handed to you? How are you? What can I do for you?” she said.  “I still do it,” she said. “I still cater to my sons.”

Despite raising her family Jewish, her daughters-in-law are not of the same religious beliefs.  “As you grow older,” she said, “you go through life cycles, and you learn to accept things that generations before would have thought were horrible.”

It was the norm for the women of her generation to never work a day in their lives. Today, there are many more professional and educated women, which is a positive thing, she said.

“I was appalled when I heard some of them (daughters-in-law) were putting their babies into day care,” Klungman said. “How can you do that, I thought?”

Mildred Klungman in her late 40s on a cruise.

A report by The Social Issues Research Center on The Changing Face of Motherhood, said that in a study conducted by the Future Foundation that in the 1960s, women spent around 110 minutes per day on “housework,” including child care, while the average for men was just 10 minutes.  She would have been in her 30s during this decade and when she remarried in 1961, her second husband brought his two children from a previous marriage, both boys, which brought her family to five men and one woman.

“I apologized after,” she said about her comment to her daughter-in-law, “because I realized they (children in day care) were just fine.”

Klungman was a stay-at-home mom her entire life, besides three years of work between marriages.
She described her every day life as a young mother living in Philadelphia where she was born and raised. 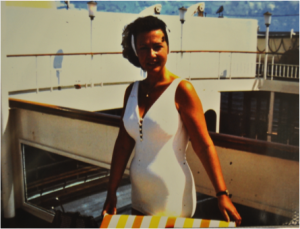 Mildred Klungman in her late 40s on a cruise.

“We had a nice little house in a tree lined street, and they were row houses,” she said. “It was all young couples – the men were home from the war, it was 1946 or 7. It was just a lovely, warm, friendly place.”

When she separated from her first husband and her two sons were older, she started working. She was a bookkeeper and also worked in a drug store.  She met her second husband at this job and when she remarried – she returned to being a stay-at-home mom again. This time she was a mother to four boys – two of her own, and two from her second husband’s previous marriage.  Her disciplinary methods of parenting, she said, are not seen as much from her daughters and granddaughters.

“They (her sons) knew, by God, that they had to be home by midnight,” she said

Her husband was not allowed to take the trash out. They had four boys in the house who were expected to take it out, she said. Getting up from the table and bringing their own dishes and picking up dirty laundry was something Mildred’s children had enforced throughout their childhood, but she said some of her grandchildren aren’t held to the same expectations.

“They were polite,” Mildred said about her boys. “They knew to open the door for you — that was discipline, manners, politeness.”

Trevor, one of her grandkids, is a 7-year-old hockey player who had a note sent home to his mother from school recently. She said he was practicing his hockey moves while the teacher was trying to read to them because he was bored.

“If my mother ever got a note… *slap slap*,” she said, as she chuckled at the contemplation. “We thought nothing of spanking our kids and they survived it. We weren’t child beaters, but they were afraid of us – no nonsense.”

A teacher was God when Klungman was young. She said if anyone saw his or her teacher on the street, “it was like oh my god – there’s my teacher, the messiah came down.”

Despite the tough love she showed her children, she said it made them into the great people they are today. Klungman quoted something one of her children said to her once they were older:  “You know mom—I didn’t appreciate the discipline we had growing up – but I appreciate it today.”

The biggest change she has seen in her lifetime is that people were generally nicer when she was young.

“I don’t know if it’s just because we didn’t have social media, so we didn’t hear about those things,” she said.
She said she wasn’t afraid to let her kids go and her mother wasn’t afraid to let her go play outside on the corner playing kickball or baseball. The only worry they would have is if the old lady on the corner would come out and say: “you’re making too much noise.”

“We lived in our own little world,” she said. “We felt comfortable and safe. World War II brought this country together beautifully.”

Klungman now lives in Florida and said she has a wonderful relationship with all her children and her 11 grandchildren. She used to golf, ski and travel, but her physical ability to do the things she loved has diminished with age. She walks with a cane and has had surgery on her hip and her knee.

“But I’m mentally just as acute now as I ever was,” she said.

By reading, keeping up with world affairs, using computers and cell phones, banking and continuing to drive, she said she continues to live a full life.