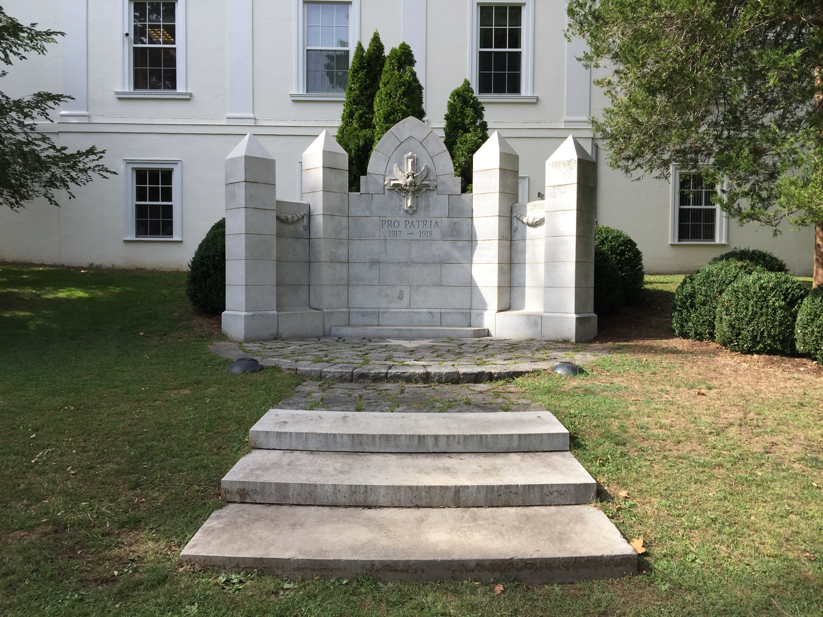 Vivian Englund, a journalism student at Southern Connecticut State University, reported this story as part of Journalism Capstone coursework on World War I. She submitted it to the Branford Eagle, which published the story on Nov. 11, 2016.

“He [Smith] also designed the cenotaph,” said DaRos, “and that originally was supposed to be an amphitheater. It would have been a place to gather—like a memorial. That part was never materialized and was never really, truly completed.”

President Woodrow Wilson commissioned the famous WWI artist to create the monument, according to the plaque that sits to the left of the monument.

The Branford Review reported that when Smith was a young officer training at Camp Plattsburgh, he suffered an injury that would lead to the amputation of his right leg. From this, he suffered pain for the remainder of his life.

The injury inspired the most productive period of time in Smith’s life. He continued to sketch often and his etchings earned him a gold medal at the Panama-Pacific Expedition in 1915.

Smith’s early life, however, did not start here in Branford. He was born in Hong Kong in 1880, and when his father passed, his mother moved the family to Germany. Eventually, the family ended up settling in the Pine Orchard section of town.

According to the plaque, the cenotaph was originally erected in May 1923 by a committee of local citizens, but was restored in 2006 by the Branford Historical Society.

The restoration project called for the monument walls to be cleaned with an eco-friendly formula, grout spaces cut and removed using chisels, the existing lettered stone removed, resurfaced and re-lettered in a matching font, according to The Branford Review’s article. The total cost of renovation was about $35,000.

The fall 2006 Branford Historical Society newsletter says lighting, a bronze plaque with a brief history of the cenotaph and an accolade cherry tree were added to the newer renovations.

“Peter Banca’s parents were caretakers at his [Smith’s] place here in Stony Creek. He [Smith] also had a museum down in Florida and I believe they were the caretakers for that as well,” said DaRos.

Across town in the heart of Stony Creek lies the second of Branford’s WWI monuments. This 3-foot-tall monument is across the street from the Willoughby- Wallace library at 146 Thimble Island Road.

The monument is adorned with three plaques: one from the Revolutionary War, one from the Civil War and in the center, one from WWI. On either side of the center memorial are two stone plaques filled with the names of troops who died in the Vietnam War and World War II.

Each plaque displays an honor roll of those who have passed on from each war. The center plaque is decorated with 36 troops’ names.

Names listed on the Branford World War I memorial: