‘…When we fought in [the] Battle of the Bulge’ 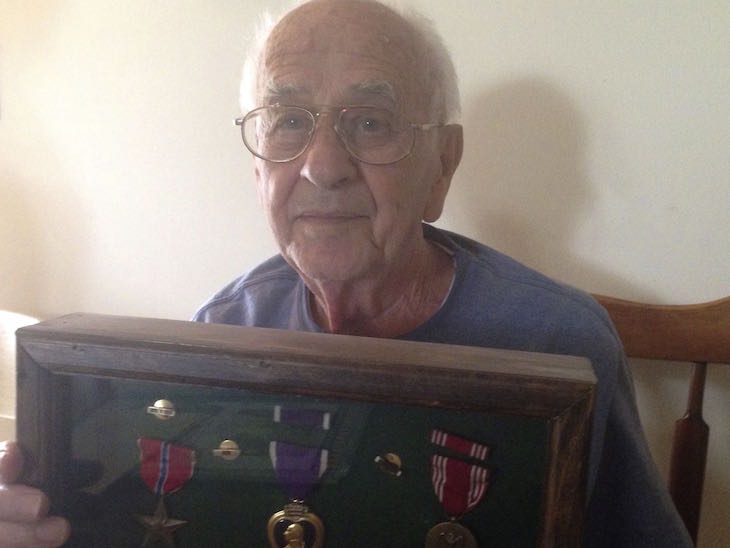 ‘That was the worst thing, the artillery’ 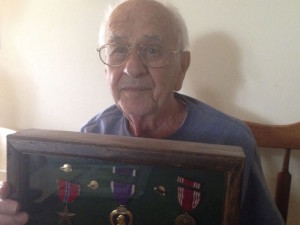 (The subject of this article is the writer’s grandfather)

EAST HAVEN, Conn. — Over 70 years later, Anthony Cacace, now 94-years-old, still remembers crossing rivers up to his neck and continuously being shot at.

“That was the worst thing, the artillery. I would say absolutely horrible from day to day, said Cacace. “Each squad had a truck; they followed us but sometimes they couldn’t get to us. They used to give us a box of cheese rations; if you get hungry you would nibble on that. Once we were in a spot where the trucks couldn’t get to us. So I carried that box for three days. I basically didn’t eat for three days.”

The biggest change that Cacace has seen was World War II, however he didn’t take the war home with him. It changed him in a way to not change, to not be violent and to stay the calm, shy man that he has always been.

The war is now just a distant memory for Cacace. It is something that he has long since accepted and never let the violence and brutality that he witnessed effect his time moving on.

“It was something just like a fairytale,” said Cacace. “you don’t think about it anymore. You just simply go on.”

Cacace was drafted into the war when he was 21, taken from his job that he received right out of high school. 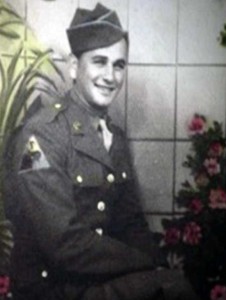 Anthony Cacace as a young soldier.

“I got drafted into the service,” said Cacace. “In 1942 we were sent overseas, but we trained in Massachusetts, Louisiana, trained in the desert, until we got called overseas.”

Lanno in uniform 70 years ago.

From then on he went everywhere from France, Germany, and Belgium.

Cacace will never forget the scenes he witnessed, the experiences he went through, and the memories that will stick in his brain forever—one’s that left him shaken with every experience.

The images of driving by the camps and witnessing Russian prisoners, skin and bones, being able to see their ribs. It was “terrible,”he said.

Cacace remembers vividly the times when they would search houses and towns they travelled during war to locate any hiding enemies, some of the soldiers being mean, some not to those they came across. Families would be sleeping in their beds, food would be found hanging from the ceilings.

He also recalls a specific day walking down the street with other men, when a soldier shot a man that was dying and screaming for help, telling him, ‘You can’t live no more.’

While in battle, Cacace received the Bronze Star Medal, in honor of saving two lives on the same day in Helmeringhausen, Germany. While a soldier was wounded Cacace went through great lengths to carry the man out safely and immediately went back in battle. Later on the same day, he assisted in carrying another solider out to safety.

“We had a photographer or camera guy with us and they got the pictures of my action and everything,” said Cacace.

A Purple Heart was also awarded to Cacace for being wounded and shot in his left arm during a battle.

“It was when we fought in (the) Battle of the Bulge. The division got called that they needed help,” said Cacace. “The company that was in Belgium were completely wiped out. They told the company commanders, the Third Army, that they needed help in that section. It took three days to get there. As soon as we got there, they were completely annihilated. All of a sudden you hear the artillery. Cars upside down, trucks too, and trees go down. It was hell. That is where I was wounded.”

According to history.com, The Battle of the Bulge occurred on Dec. 16 1944.

The website states, “…three German armies (more than a quarter-million troops) launched the deadliest and most desperate battle of the war in the west in the poorly roaded, rugged, heavily forested Ardennes. The once-quiet region became bedlam as American units were caught flat-footed and fought desperate battles to stem the German advance at St.-Vith, Elsenborn Ridge, Houffalize and, later, Bastogne, which was defended by the 101st Airborne Division.”

It also said that it “was the costliest action ever fought by the U.S. Army which suffered over 100,000 casualties.”

All those wounded were transported on a little plane to a hospital in the same area within the country they were settled in. Cacace stayed in there for a month and was eventually transported back to the outfit, and by the time he arrived back to camp, the war was declared over.

Cacace stayed in the camp, sailed on a boat and was able to go home. He had his uniform and all of his army clothes with him and he wanted to make the memory vanish in some way.

“When I got home,” said Cacace, “I took all my clothes and I threw them away. I’m sorry I did after.”

Going from a comfortable lifestyle with his siblings and parents, Josephine and John Cacace and then adjusting back after the war was not too hard for Cacace, as he got his job back that he previously had before the draft and just continued living like any person would.

“You adjust,” said Cacace. “It was horrible but I made it. Some of my buddies got it, but that is war.”

Cacace said through his time in battle, witnessing events, the meanness of individuals, he never wanted to lose that shy, sensitive soul that would care for anything and anyone that ever crossed his path.

In his Class of 1940 high school photo biography were the following words: “He seldom speaks, but when he does, he speaks words of wisdom,” written in his yearbook photo biography.

That was Cacace his whole life, even after the war took him from his natural habitat. Cacace always wants people to be reminded that throughout his life, he has always continued to be a helpful person, and that is the legacy he wants to leave behind. He wants to be known as a good father and someone that “helped everybody when they needed it.”

Now many years after his experience in war, Cacace will always be reminded of the battle he had to fight, and the change he went through.

“I never tell anybody,” said Cacace. “This is the first time I’m saying it. It’s just not something that you can talk about everyday.”

As soon as Cacace sees anything on television related to the war, he goes back to his time in battle. Wondering how he made it, seeing it as if he’s back on the battlefield.

“The guys, it looks so real. I say ‘I went through that, the same thing,’” said Cacace. “Sometimes they show real shots [of the war] and I was in that. I lived through that.”