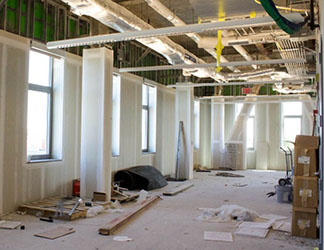 The new Hilton C. Buley Library was opened to students upon their return from spring break, but what’s accessible now is only half of what the new renovation will have to offer.

Trailers in the Engleman to be moved soon.

According to Robert Sheeley, the Associate Vice President for Capital Budgeting & Facilities Operations, all construction on the library will be completed by June.

Once construction is finished, the trailers will be moved from the Engleman parking lot, freeing up about 35–40 spaces, Sheeley said.

“We have to redesign the entire Engleman lot once the Science Building is complete. We will be working on a design during the Fall 2015 and Spring 2016 semesters,” he said.

Once construction is completed for the offices of the Director of the Library, Christina Baum, and her administrative staff, more study space for students will be cleared that they’re currently occupying, said Baum.

“We’ll be getting a break area and two new conference rooms,” said Baum. “We’re currently occupying study rooms in the 2008 wing that will finally be available to students once we move.”

Along with new group study space in the stacks wing, there will be 4 new general purpose classrooms in the renovated wing; 5 in total since the largest classroom has a divider that can be closed to make another classroom, according to Sheeley.

Entrance to the new Tutorial Center

Space on the 3rd floor is being worked on for the new Student Success Center, which will include tutoring space, a computer lab, conference rooms and offices. The new tutorial center will include tutors in math, writing, and various sciences, according to Sheeley. The rooms for this now are currently empty except for some desks and chairs.

“Once [the Student Success Center] is opened in the fall, we’re going to have the library staff work and train the tutorial staff to use library resources,” said Baum.

The Cyber Cafe that has yet to be started

According to President Papazian at the ribbon cutting event, the Cyber Café will “definitely be ready by fall.” The new café will have more options for “on-the-go” meals, said Brad Crerar, the Director of the Student Center.

“The Cyber Café won’t be like another Bagel Wagon,” said Crerar. “Instead of having mostly snacks, it’ll have more to-go breakfast foods, sandwiches, and wraps.”

A construction worker works on the new exhibit

Along with the café, Student Success Center, and more study areas, 24-hour study space on the 1st floor will be available to students in the fall, with new self-checkout areas, said Baum.

The ground floor will be home to two new features: an art gallery opening April 24th, and a media center.

“The media center on the ground floor will be home to collections of all kinds of media,” said Baum, “We’re going to have new TV’s and listening and viewing areas.

Buley Library 2015: What will soon be available to students!Photos and video by Taylor Nicole Richards