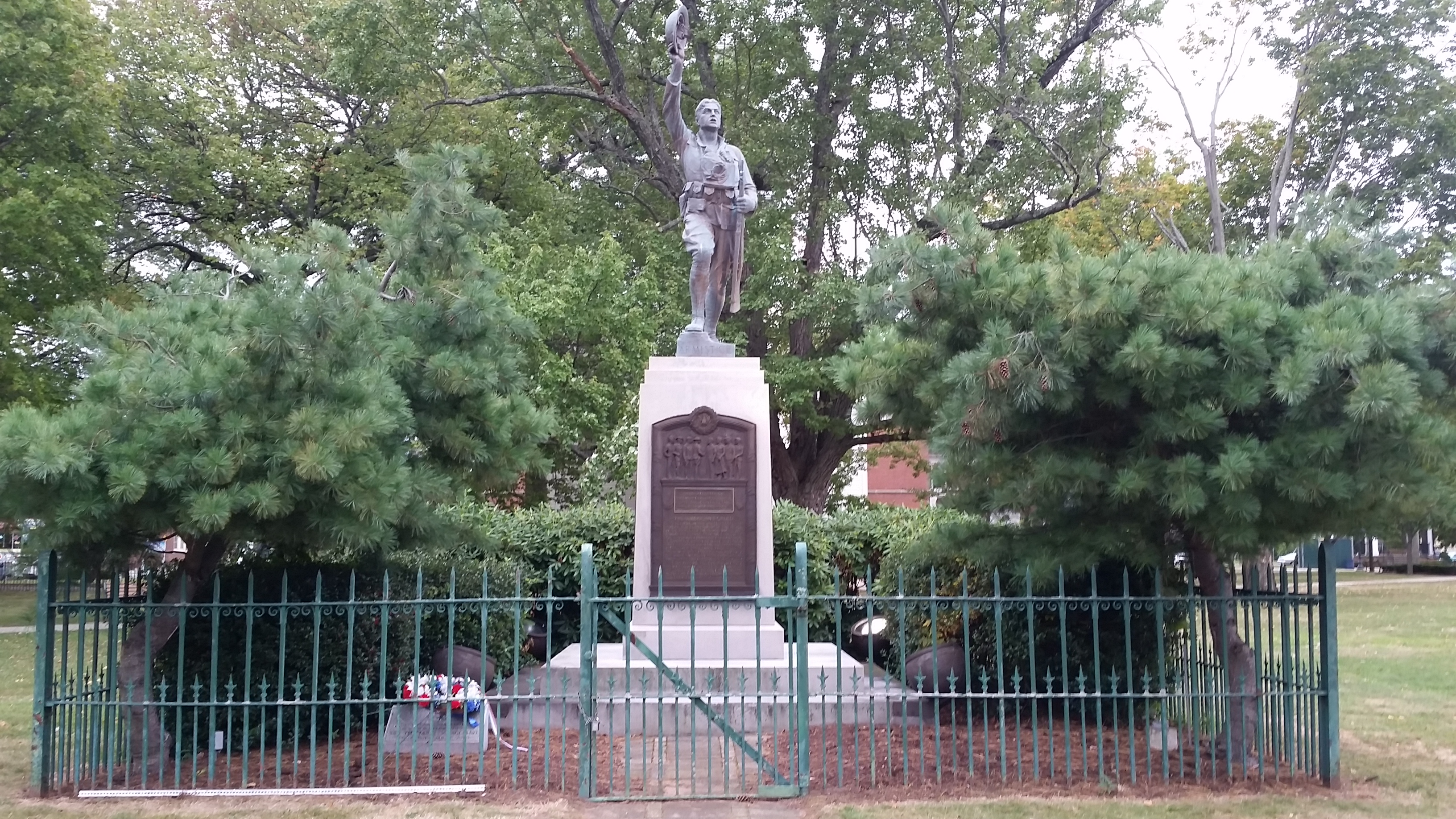 Edgar Ayala, a journalism student at Southern Connecticut State University, reported this story as part of Journalism Capstone coursework on World War I.

There wasn’t always a doughboy soldier on West Haven’s green. In fact, before the doughboy, the World War I monument was originally a long rectangular wooden memorial.

The old honor roll contained the names of more than 1,000 West Haven personnel who fought in the war, and displayed those names on narrow stripes of wood. The people who died in the war had a gold star painted next to their name.

Of those gold star names were two brothers, Harold E. Hughson and Walter J. Hughson. Harold and Walter were both privates who served in the American Expeditionary Forces until their death.

Walter was killed in action on Oct. 23, 1918, while his brother, Harold, was killed in a motorcycle accident on Sept. 18, 1918. As a result, West Haven honored them both by naming the city’s American Legion after them.

Eleven years after the Great War’s ending, a committee of members from the Hughson American Legion Post 71 decided to dedicate a monument to the West Haven residents that made the ultimate sacrifice in the war.

City historian Jon Purmont said the previous monument got destroyed over the years from storms, resulting in Hughson Post American Legion to vote on rebuilding a new one in 1928.

“They told me it got dismantled in the storms. They took the bottom off, and so they replaced it with that statue,” said Purmont, referring to the doughboy soldier on the monument.

After the old monument was removed, the names on the wooden stripes were distributed to their corresponding families as souvenirs.

The new monument dedicated on Nov. 11, 1928, is an 11-foot 4-inch bronze statue of a doughboy soldier mounted on top of a 12-square foot granite base. The doughboy soldier holds a rifle in one hand, and a helmet on the other hand.

Three bronze plaques with 28 names surround it, representing the West Haven residents that died in the war.

The plaque on the front face of the monument features military figures and civilians shaking hands. A message underneath that figure displays “dedication to the memory of those who gave their lives in World War 1917-1918.”

Beneath the dedication is the American Creed, a pledge that was adopted by the U.S. House of Representatives in 1917.

According to an article written in the West Haven News in 1987 by former city historian, Harriet C. North, the new monument cost the city $22,000.

Yet, 75 years after the unveiling of the doughboy monument, the memorial would encounter those same weather-beaten conditions that caused names to no longer be legible, triggering a four-year renovation on the monument that was completed in late 2000.

An article by the West Haven Voice in 2003, written by Michael P. Walsh, stated Derby Avenue monument crafters Giordano Bros. refurbished the monument to what the it looks today.

The four-year renovations in 2000 totaled $6,000, according to mayoral aide Vito M. Mazza. The money came from the city’s Memorial Day parade fund.

The new renovations included the fence that now surrounds the monument, and equipping it with new “high-pressure sodium-accent lights to compliment the undertaking.”

The original sculptor, Anton Schaff, titled the statue “Armistice.” Schaff is also known for his work in war memorials in New York and New Jersey, and Confederate statues at Vicksburg National Military Park.

Every year on Nov. 11, the city commemorates the deceased names on the doughboy monument.

To view a full list of names on the memorial, click here to open a PDF file.