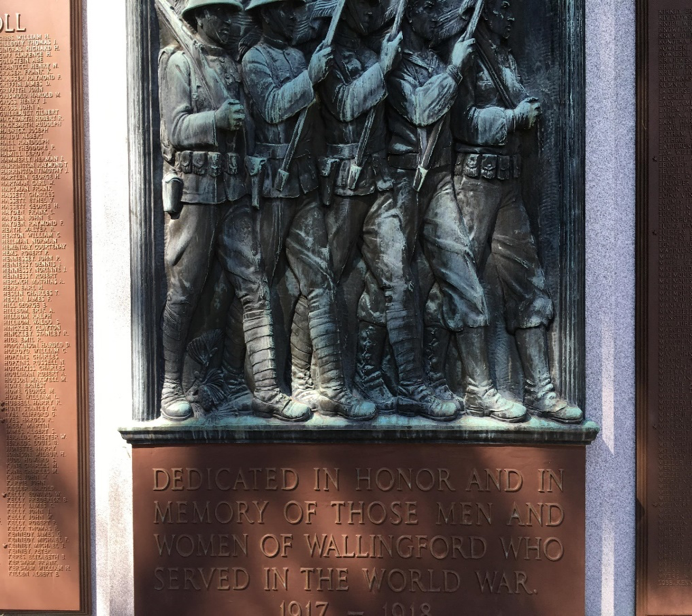 Gregory Gagliardi, journalism student at Southern Connecticut State University, reported this story in 2017 as part of Journalism Capstone coursework on World War I.

Flying ace Gervais Raoul Lufbery may be the most famous name on Wallingford’s World War I monument.

Although he was only a resident for two years, Lufbery is among those honored by the town for their service. Listing more than 500 names, the bronze and granite honor roll in front of Town Hall, includes those who died in combat, marked with an asterisk. Lufbery, who served with both the French Air Force and the United States Army Air Service during World War I, died during battle in May 1918 in France.

“Lufbery would travel a lot,” said librarian and member of the Historical Society Amy Humphries. “His father grew up in the area and moved back home after his wife died. Lufbery was 1 at the time of his mother’s passing. He stayed in France and, was raised by his grandmother. He would come home to Wallingford between trips during his time in the service.”

Wallingford’s war traditions date back to then-Connecticut Gov. Raymond E. Baldwin’s term in 1939-1946. During his time as governor, he dedicated a monument in Harrison Park, located off Cedar Lane and across from 5 Kovac’s Place to the “sons who served during World War I.” This monument was the original honor roll, but only contained 29 names. Lufbery, who was later inducted into the National Aviation Hall of Fame, was one of them.

The Town Hall monument was dedicated in 2006, and features additional memorials commemorating World War II and the Korean War. The World War I monument features two bronze plaques with names, a third plaque with the dedication, “In honor and in memory of those men and women of Wallingford who fought in World War 1917-18.” 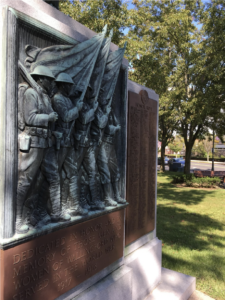 The middle panel also has a bronze bas relief plaque, depicting a group of soldiers, three of whom carry American flags. Above it is a large bronze eagle spreading its wings.

“People go by the monument,” Humphries said. “It’s in the center of town. In the summertime, concerts happen and the area is frequented by many.”