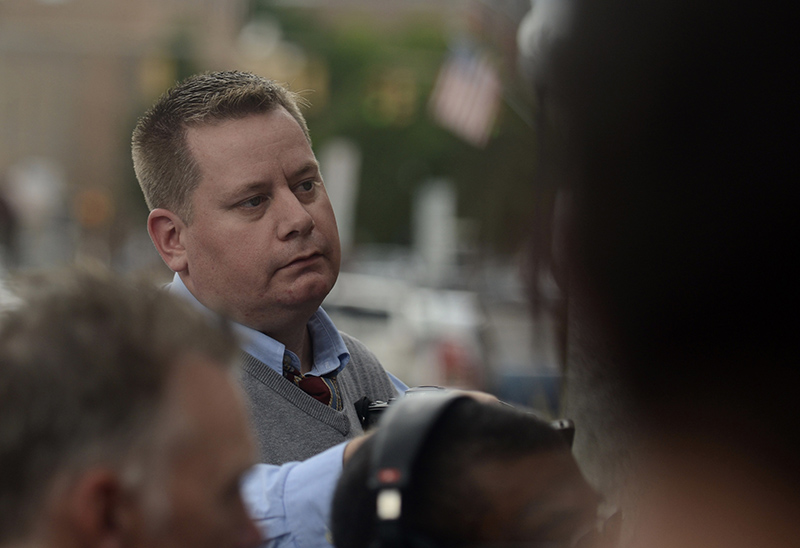 Every morning when Eugene Driscoll, the editor of the Valley Independent Sentinel, unlocks his office door, the first thing he sees is the code of ethics from the Society of Professional Journalists.

Driscoll said because the Valley Independent is an online publication and because of the impact of social media, he is more intertwined with his readers than ever. He said his audience acts like a government, in that they often check and balance his work and for that reason he will often recall the Society of Professional Journalists (SPJ) Code of Ethics when in the field and working throughout the day. 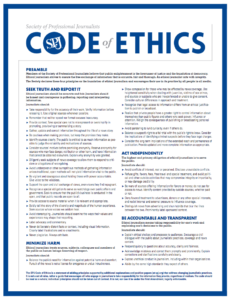 The SPJ Code of Ethics

“That’s what the readers are to us, they’re always giving us feedback,” said Driscoll. “So in the course of any day we are always just reviewing ethics because we act as a check on local government, and so I want to make sure we are holding ourselves to a similar standard. It would be hypocritical for us to hold government to a high standard then for us to be ethically lax.”

Driscoll said ethics is an internal conversation a reporter has every day. He said by his own standards, the biggest of journalistic sins would include taking money to write a story or reporting in any way that would cause harm to a community. He said on a local level, minimizing harm to the community is especially important and can become difficult when trying to report accurately on city government, but also considering that a story can hurt the individual.

Driscoll said a recent example would be a story he had to consider whether or not to even cover. He said he was always told not to report a suicide unless the person was a public figure or official, or the suicide occurred in a public place. He said this individual who committed suicide did so in the woods and even if other media outlets ran the story, he chose not to. He said even though he was within his rights to report the suicide and people expressed interest in the story, he considered the individual’s family and the grief they must be feeling, so he ultimately decided the need to minimize harm outweighed the need to cover the suicide.

Driscoll added that because the Valley Independent is so hyper local, he does not have the opportunity to remain anonymous and thinks about ethics more now than he did when he was working for other, more traditional newspapers with larger staffs. He said his readers are his neighbors and they can just knock on his front door, so he has to be even more diligent in his reporting and ethics.

“The impact of what you write can be felt much greater at a hyperlocal publication,” said Driscoll. “So I’m always trying to keep that in consideration.”

Driscoll said that reminding his neighbors that he is among them is also a strategy he uses at the Valley Independent because it gives a sense of transparency. He said part of the post-election frame of mind toward media news organizations is that they are this pillar. But if he can answer the readers’ questions, interact with his audience, and remind them that even as a reporter, he is also one of their neighbors, the Valley Independent is not an impassable pillar but rather a small news organization made up of their peers. 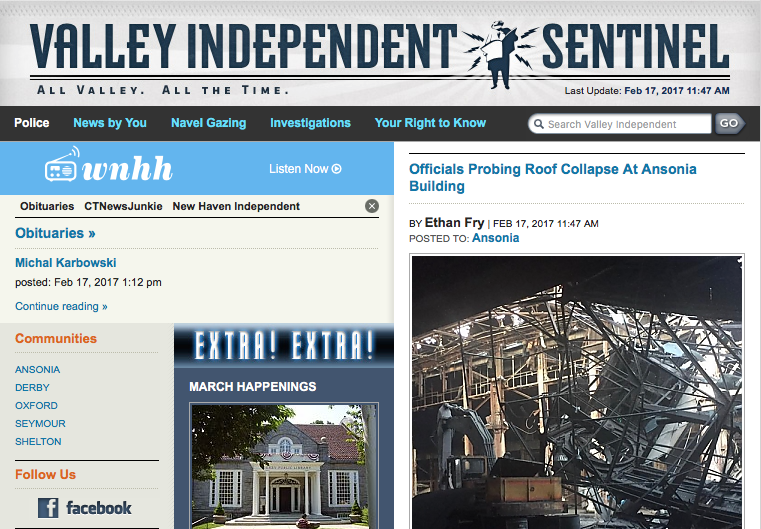 The homepage of the Valley Independent Sentinel.

“I think this old view that the media is this monolith that can never make mistakes, that hurts us,” said Driscoll. “That’s why I share some personal stuff, just so people know we’re all human, we all make mistakes.”

Driscoll said values such as minimizing harm to the community and ensuring transparency are more important than ever, especially after millions of viewers witnessed major media news outlets get the election wrong. He said in all his years as a journalist, the distrust in the news media is at an all-time high, so it is more important than ever to be open with the public.

Driscoll said another way the Valley Independent practices transparency is if someone enters a complaint in the comments then he will answer them publicly. He said a recent example would be when the chairman of the state Republican party, J.R. Romano was criticizing them after interviewing a Democratic candidate running for state office and the candidate gave out wrong information. He said Romano was right to criticize them because they had made an error, but the way he handled the complaint may differ from how other major news outlets would. He said he answered Romano publicly, in the chairman’s thread and told him that he was absolutely correct.

Driscoll added transparency like this was not always welcome in the newsroom because answering a complaint in an open forum was frowned upon; that a reporter admitting wrongdoing would make the paper look bad and probably make the bosses sore too. But he said transparency is crucial now more than ever, that the internet has broken barriers and there is no longer an inaccessible news force, the comments can become a “cesspool” because people are angry that the economy not being what is used to be or jobs not being what they used to be, especially in the (Naugatuck) Valley, so it is his job to moderate those frustrations and make sure the Valley Independent’s comments section does not become a gutter.

Driscoll added another aspect to ethical journalism is never assuming that a journalist’s world view is the same as their audience. He said journalists should always question themselves: their values, their beliefs, and even their editors, which can be easier said than done. He went on to say that the 2016 election was a perfect example, in that many journalists were shocked with the results. He said it was at 3 a.m. when he ran a story on why a candidate like Trump appealed to Naugatuck valley voters, despite his own feelings of not wanting to. He said that he would publicly express his opinions about why a candidate like Trump would not win. But after Trump did win, he said that he realized that he was imposing his world view onto his readers.

Driscoll said if you asked him five years ago he would say he does not have any biases but that is a naive concept because everyone does, even as reporters. He said reporters need to challenge themselves and keep an open mind about everything.

“It is very hard to see the world through someone else’s eyes but it can make you a better reporter and every day is a learning experience, you always have to open your mind to learning,” said Driscoll. “Just assume that you’re right today but you could be wrong in an hour. That is really important, especially in today’s journalism. You have to be able to question your own assumptions.”

Students in the “Media Law and Ethics” classes at Southern are asked to interview working journalists and write about how ethics and law play a role in how news is covered. The stories are reflective of the difficulty and care reporters and editors use in their craft on a daily basis.  This article was written by a student in fall 2016.