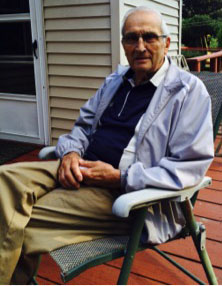 Born during the Great Depression, Vincent Cofrancesco said as a child he learned about the difficulties of life and the importance of taking care of one another. His empathy was shaped by an incident when he encountered a stranger in his garage. He was 6-years-old at the time.

“I saw him come by one day, and I got scared and called for my father,” Cofrancesco said. “My father initially chased him away and knocked him down outside, then asked him what he wanted. The man looked up at my father and said ‘I’m starving.’”

Cofrancesco said his father helped the man up and brought him into the house, where his parents fed him and even gave him some food to bring home.

“In the most desperate of times,” he said, “the way people helped each other was just incredible.”

With regard to the biggest change he has seen throughout his 86 years of life, Cofrancesco said the world surrounding him has changed, but the people surrounding him have not. He said he’s happy to have seen people continuously recognize the importance of helping one another, which is something he himself has always believed in.

“Doing a favor for someone who can’t do it by him or herself does a lot for you,” he said. “Even in retirement, I still reach out and help people in need.”

Cofrancesco recounted a recent kitchen remodeling he completed for a friend. The job costs ordinarily would fall in the $30,000-40,000 range, but he expected nothing in return for his hard work.

“He gave me $500 worth of gifts after I was finished, and I said ‘You didn’t have to do that,’ because I was just satisfied with a job well done,” Cofrancesco said. “But the gratitude he showed me meant so much.”

Tragedy struck during Cofrancesco’s childhood when his father suddenly passed away at age 40, leaving behind a wife and five sons. Although his mother did her best to raise the boys, Cofrancesco spent some time living with his aunt and uncle. He said his aunt and uncle were strict but taught him respect.

“I missed out on a lot of things kids generally do,” he said. “But through my mother, aunt, and uncle, I learned to respect people and always give back whatever I received.”

Cofrancesco said the biggest challenge of living with his aunt and uncle was the fact that they only spoke Italian, which made it difficult for him to read, write, and complete his homework. As a result, he struggled in school for most of his youth.

“In the 10th grade, I caught a teacher’s attention when I wrote a poem about a boy tapping his feet,” Cofrancesco said. “From that point on, I was inspired to make honors, get straight A’s, and become more active in the school community.”

Cofrancesco’s final two years in high school began a lifetime of community involvement. After graduating, he served in the National Guard, where he became a typist. This led to him being entrusted to file names for the Korean War Draft, where he took advantage of his position to help a friend in need.

“He came to me and said ‘Vinny, my wife’s pregnant. If I go to Korea, I may never come back. What can you do for me?” Cofrancesco said. “And I told him ‘It’s out of my hands.’ But I misfiled his name, and they had no way of checking at that time, so he was safe.”

Five years later, Cofrancesco ran into his friend at a convenience store. After admitting to doing the favor, his friend asked why he hadn’t told him about it at the time.

According to CNN.com, 36,574 U.S. soldiers were killed in the Korean War, with 103,284 injured. After his years of service ended, Cofrancesco settled down with his family in Bethany, Conn.

He and three of his brothers invested in 10 acres of land, where they built four houses. Two, including his house, are still occupied by family members today.

Cofrancesco and his family became involved in the Bethany Athletic Association, where they successfully raised funds for the town, increasing its treasury from $7,000 to $70,000 within a few years. They also worked to get a grant from the town government to repair a local baseball field, which was then named in the family’s honor.

“I came home and my wife told me, ‘They should name that field after you,’” Cofrancesco said, “and I smiled and said, ‘They just did.’”

Although now retired from the BAA, Cofrancesco said he still attends town functions, such as the annual carnival. He said he is happy to see many young people contributing to the town community, including his family members.

“Many young people today see it right,” Cofrancesco said. “And I’m especially pleased to say the values I learned to appreciate as a kid have carried on through the many generations of my family.”

“At a Chamber of Commerce meeting, a black man was given money to start up a cab company and a black woman was given money to open up a store,” Cofrancesco said. “Both businesses closed within three months, and when I spoke to a Chamber member about it, he laughed it off. He said they only gave them the startup money for publicity, and didn’t care what happened to them afterward.”

Cofrancesco said American society is “at a crossroads,” but believes “we will pull through,” because young people are self-aware and prepared to take action. However, despite expressing confidence in today’s generation, he said those who take life for granted dishearten him.

“Some people think they’re entitled to being born and being alive,” he said. “They don’t think they have any obligation to their fellow man or society. When I was growing up, you worked to support your mother and father, and now I’ve seen situations where that’s been reversed.”

Cofrancesco said parents are doing a disservice to their children by not encouraging them to take on more responsibilities. He said “too much freedom is not the way to go,” and that stricter parenting, similar to what he experienced, has long-term benefits.

“Kids are losing out on the opportunity to learn from the experience their parents have,” Cofrancesco said. “When I was growing up, parents better prepared them to face the world.”

A “period of tranquility” after World War II has made people complacent in today’s society, according to Cofrancesco. He said young people could have grown from experiences similar to the ones he endured.

“People can be rewarded by facing things with strength,” Cofrancesco said. “We don’t have the strength now because we don’t have the same hardships as I did with the wars and Great Depression.”

Cofrancesco said personal loss gave him a different outlook on life, from losing his father at a young age to the eventual deaths of all four of his brothers. He said he had revelations when driving to two of their wakes.

“I’d never been in an automobile accident before I side-swiped a taxi on my way to my brother’s wake. And I didn’t have another until I rear-ended a car on my way to another brother’s wake years later,” Cofrancesco said. “I knew that my mind wasn’t where it should have been. Both accidents taught me to appreciate the limited time we have here.”

Although his life has had its hardships, Cofrancesco said he looks back on it with feelings of positivity and fulfillment.

“Life is difficult, and you don’t realize it when you’re born because your parents just deal with it,” he said. “But in the end, anything that wasn’t good, we just put behind us.”