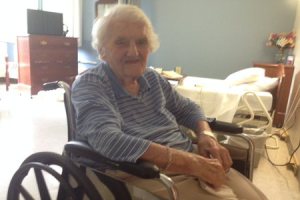 SHELTON, Conn — For Minnie Sutton, 105-year-old residing in Bishop Wicke Health Center, the biggest change she has seen was life during the Great Depression.

“It was such an extremely hard time for everyone,” said Sutton. “There was just so much going on at the time.”

The Great Depression can be described as one of the hardest time for people during the 1930s. So many people lost so much as a result of this economic depression. It can be said that lives were changed dramatically for many, including Sutton.

Sutton was born on May 27 1910 in the North Bronx. Sutton loves the fact that she was born and raised in New York, especially the Bronx. She loved the area, the people, and the sites, just about everything in the Bronx. Things for her growing up, she said, were quite easy before the Depression hit.

After the events of World War 1, things started to become uneasy. Her father’s business, it started to take a hit. She said that her father had it rough during these times because he was a German. Before she knew it, the Great Depression began and everything in her life changed.

With people losing their jobs, there was no source of income to support themselves. According to US History.com, unemployment statistics increased. In 1932, there were about 8,020,000 people that were unemployed. One year later, the unemployment rate increased to 12,060,0000. As in 1931, there were 15.82; while the following year had an increase of 23.53. Times were changing quickly for the life of many people.

Sutton said the wealthy people were the ones who suffered the most because those people never had to worry about money before until that very point. She said she did not enjoy seeing people suffer the way they did during these times.

“So many people killed themselves because they did not know what to do with their lives,” said Sutton. “It was so horrible.”

Sutton also felt the struggle as well because of her father’s business was shut down as well. There was no way for the business to stay open because the rate of unemployment. She said that even with that going on, she and her family made way the best that they could.

“People were really suffering during these times,” said Sutton.

Regardless of the Depression going on, Sutton continued to live her everyday life. She attended Catholic School in the quarter section of the Bronx. Kids might not know what was going on or why it was happening, but the children still went on to get the education that was needed.

Even the small things that people could do during the times before the depression were cherished. Sutton said that life was just extremely different and the changes in the way that not only she but also others had to live made her appreciate life more.

When the Depression ended, Sutton moved to Yonkers. However, she could not stand not living in the Bronx, so she moved back. Sutton has been married twice and both of her husbands died. Her second husband brought up two children before he passed away at the age of 86. Sutton still has one child left and he is 78.

As reaching the age of 105 years old, Sutton said that she always wanted to stay as healthy as she could while growing up. She believes the reason that she is still alive today because of walking. Sutton walked all the time, everywhere and everyday. While she was growing up, she and her brother would wake up at 5:30 am and walk two miles everyday around the Bronx. She never missed a day and found walking to be such a soothing thing, especially during the Great Depression.

“I think walking is such a wonderful thing,” said Sutton. “I just loved to walk all the time and it was something me and my brother would do together.”

Sutton is not alone living pass 100 years old. In 2013, new Census Bureau Data showed the population of people living past 100 has increased to 65.8 percent over the past three decades.

As much as Sutton enjoys living in Bishop Wicke Health Center, she still misses her hometown of the Bronx. If she could, she would go back to New York as fast as she could. However, as she got older, Sutton decided it was time for her to live in a nursing home. She said that it was for her own good.

“You’re not (at a nursing home) because you are sick,” said Sutton. “You are here because you need the help.”

Before entering Bishop Wicke, Sutton lived in Wesley Village in Shelton, Conn. Sutton loved living in Wesley because she had all this space and felt like an apartment that she can all her own. When she turned 100, she was told that she needed to go find another nursing because she needed to be taken care of better because of her age. Sutton said she was sad to go, however, it was for her health. Sutton is not really a fan of having a smaller room now, but she still enjoys Wicke as much as she does.

Sutton said that it is very difficult being the age of 105. She isn’t really as excited as she would think to reach triple digits.

“Being in the hundred range can be so hard at times,” said Sutton. “It’s a very difficult life to live.”

As for her time on Earth, the one thing Sutton wants to be remembered for is being a good person to all of her peers. After living the life she did during the times of the Great Depression, she wanted to treat everyone with respect and to be as nice as she could be. As bad as the time period was, Sutton learned valuable lessons and calls herself a survivor.

“I’ve been living for a long time,” said Sutton. “Maybe God wants me here for a reason.”