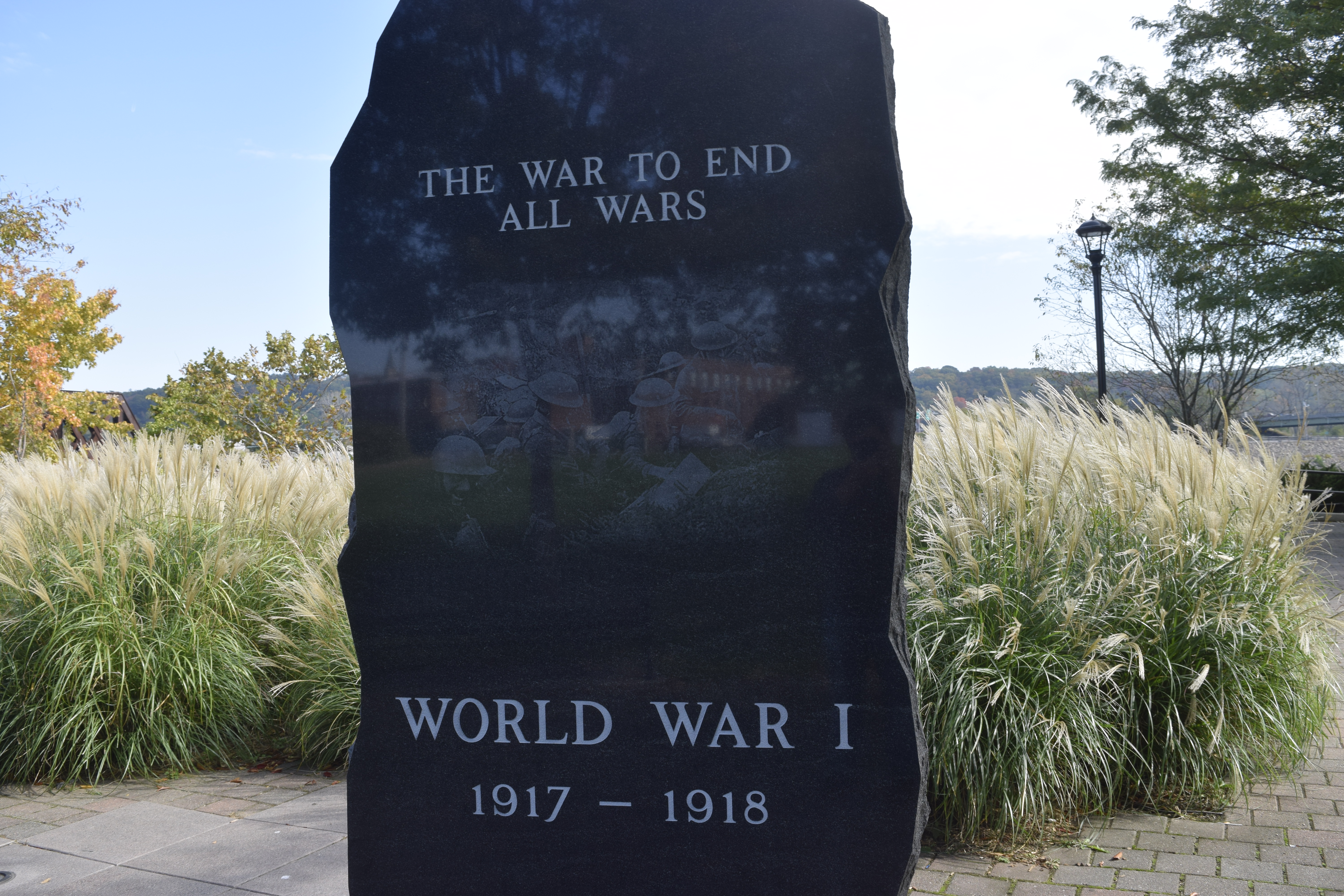 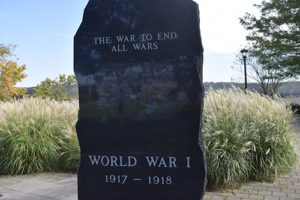 Shelton war monument in Veterans Park. The slab honors those who were killed in action. | Dylan Haviland photo

Dylan Haviland, a journalism student at Southern Connecticut State University, reported this story as part of Journalism Capstone coursework on World War I. He submitted this story to the Shelton Herald, and it was published online Nov. 11, 2016.

Al Sabetta, a Shelton resident and Korean War veteran, pointed out the photographs etched on the black granite slab of the war memorials in Veterans Memorial Park.

On the polished back of the WWI monument is listed Charles W. Sutter, a private whose name is honored by Sabetta’s American Legion Post 16, named “Sutter-Terlizzi.”

Sutter is listed among the 17 men from Shelton who were killed in action during WWI. He was the first man from his city to die in battle.

Fourteen of the veterans listed on the WWI memorial fought in the Army, two in the Marines, and one in the Navy.

To the left of the WWI monument there are three more slabs representing those who made the sacrifice in WWII, Korea and Vietnam.

According to the Connecticut military service records, Charles W. Sutter was a 21 year old from 175 Division Ave., Shelton. He enlisted in the army on Sept. 6, 1917 in Fairfield and served in the 304th Infantry Regiment to Sept. 19, 1917 and then the 102nd Infantry Division until his death. Sutter was killed in action on Feb. 28, 1918 in Chemins des Dames, France.

A clipping from Milestones and Memories from the Suburban News showed that Sutter’s body was brought home on July 23, 1921 and was followed by a procession down Howe Avenue.

Sabetta and members of the Shelton American Legion wanted to honor those like Sutter who sacrificed their lives for their country, and to also have a designated area to hold military ceremonies. Through 2000 and 2001 Sabetta, members of the Legion and his family visited several community development meetings to construct the memorial slabs.

Working with architect Jim Tate from James W. Tate & Associates of Fairfield, they decided that each slab would be uniquely cut and set diagonally across from each other.

“There is a meaning why they are set in that staggered pattern,” said Tate in a phone interview. “It represents the individual soldiers as they march.”

The group eventually contacted Rock of Ages, a granite quarry in Vermont that gathered the black stones for the memorials.

According to Tate, the project, which included setting up the area, cost the city $211,000. The images chosen to be featured on each of the memorials were laser etched into the stone. Overall, the four slabs each measured at around 9 feet, with a length of 4 feet and a width slightly above 1 foot.

On June 3, 2001 Mayor Mark Lauretti, Sabetta and the Legion officially unveiled the monuments to the public. Sabetta stayed at the site for a majority of the day.

The monument was not the first nor the last to remember those who fought and died in WWI. Down the street on Howe Avenue are two more monuments.

Built around six years ago is a large vertical stone with an eagle perched on top. The newer monument features 18 names of Shelton residents killed in WW I, Pvt. George Amaral of the Army was the additional name.

The older monument, a plaque, was built around 1955 according to Sabetta.

Sabetta, who dedicates much of his time to preserving the memory of veterans in memorials, went through the names of those who served and died for their country, retelling stories of their service and life.