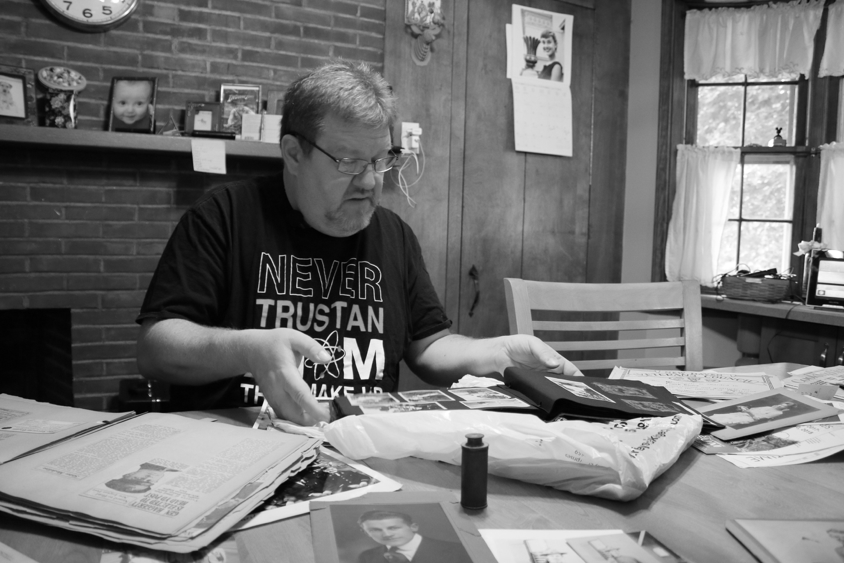 Tyler Ferrara and Mary Rudzis, journalism students at Southern Connecticut State University, reported this story in 2017 as part of Journalism Capstone coursework on World War I.

Despite being injured and earning a Purple Heart, and fighting in one of the bloodiest battles involving the 102nd Infantry Regiment, Rivers survived to tell his grandson, Frank Rivers of Berlin, Conn., about his near-death experiences.

Cpl. Rivers, who was born in Holyoke, Mass. in 1893, had a sort of “uncanny luck” according to his grandson, and narrowly escaped some tricky situations throughout his time in the war. A veteran of the Mexican Border War, Cpl. Rivers enlisted at age 23 in the New Haven National Guard.

“There were caves, apparently, that the Germans had occupied when they were backing up when the Americans came in so they were pushing them backward,” said his grandson. “The Americans stayed in the caves that had been German, and he had been sleeping one night and he saw a newspaper stuffed into the crevice of the cave, and he thought it would be interesting to read it, but he was tired so he didn’t.”

That choice very may well have saved Cpl. Rivers’ life because a few days later he heard that an explosion happened in the cave they had stayed in. Cpl. Rivers believed the newspaper was a booby trap.

Cpl. Rivers was also exposed to gas when serving in the war and his uncanny luck saved him once again.

“He was out in the field traveling through and they got hit with gas,” said Rivers, “and the guy that he was with died in, like, a few days and he was exposed to the same amount and he came out fine for it. They were right side by side to each other. [My grandfather] was lucky, I guess. Maybe the grenade wasn’t lucky, but it could’ve been a lot worse.”

While Rivers was in France, he fought in the battle of Seicheprey, which was a significant battle for the 102nd infantry, which he was a part of. According to the American Expeditionary Force website, at least 80 members of the 102nd infantry were buried in Seicheprey. During this battle, Rivers was partially blinded in one eye by grenade shrapnel.

“That’s why he got the Purple Heart,” said Rivers. “I believe he wanted to continue serving.”

Despite having been injured in the war, Cpl. Rivers said in his military questionnaire that the war had a positive impact on him both physically and mentally.

Rivers also remembered a story his grandfather told him that indicated how high strung and on edge he and the rest of the men were.

“It was at night, they were in their trenches, when he had heard a sound and he gave the warning halt for ‘all fire’ or ‘all shoot,’” said Rivers. “The noise kept coming, he said halt again, it kept coming, and he shot. The next morning, they found a dead cow in the field.”

The Rivers family also has to have newspaper clippings about Cpl. Rivers’ time in the war, including an article titled, “Corporal Rivers is doing very well.” The article includes a photo of him and said that before the war, he was a prominent amateur athlete and won several records as a sprinter, and at the time the article was written, had served as a corporal for two years.

The article said that in one of Cpl. Rivers’ letters, he said his squad was stationed 150 feet underground, and the only light they had came from candles.

“The corporal states that New Haven will be proud of the Grays before the war is over,” the article said, “and that several officers and men have been recommended for medals for bravery in action.”

There is also an article titled, “Corporal Rivers narrowly escaped death in No Man’s Land,” which tells a story of how when Rivers went to rescue a man who was believed to be caught in barbed wire of the German entrenchments, as well as a shell exploding near him during an attack by the Germans. He sent a souvenir home—a strip of cloth cut from the coat of a German officer killed during the attack.

Rivers went home after being discharged, but he loved France so much that had he not been dedicated to taking care of his mother back in the United States, he may have never come back. He spoke French and loved the culture, but was dedicated to coming back to his mother.

Rivers said that what stood out about his grandfather the most was the love he had for his country.

“He was a patriot,” said Rivers, “and he made me want to be aware of my family history.”