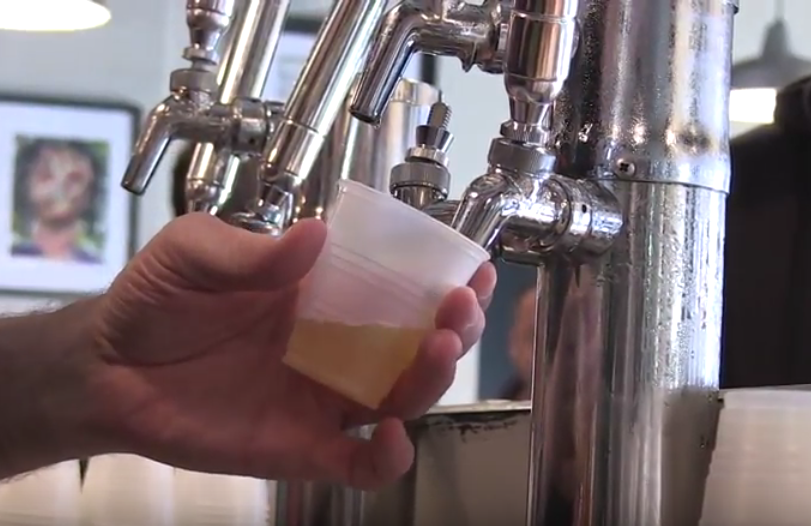 This story was reported by Tyler Ferrara and Mike Apotria as part of Southern’s Multimedia Journalism course taught by Jodie Mozdzer Gil. The reporting was part of an interactive map detailing businesses in the New Haven area.

With the expansion of the tasting room, New England Brewing Company is seeking to treat their faithful customers with an atmosphere where they can sit down and enjoy a sample while their growler is being filled with their favorite hoppy craft beer.

The New England Brewing Company, or NEBCO, has been serving up a variety of unique craft beers for Connecticut since the year 1986. After working for the company in South Norwalk, current owner and master brewer, Rob Leonard purchased the name of the company, but wanted to re-locate to the Woodbridge/New Haven area, where it has been since 2001.

NEBCO is now located on 175 Amity Road, Woodbridge and offers a variety of avenues to enjoy their products, including kegs for distribution, cans at local liquor stores or even stopping by to their newly renovated tasting room for a growler and a sample.

Every month NEBCO also features local artist’s painting and sculptures around tasting room for viewing and sale to boost the reputation of the artist, while giving their customers something appealing the eye to view.

When NEBCO starts developing a craft beer, it begins at the thinking stages where they use 10-barrel fermenter to tinker and develop a precise product for their consumers.

According to master brewer Jeff Koebbe, NEBCO will do 60-barrel brews, five days a week and unlike most breweries, NEBCO boils each and every batch for at least 90 minutes, as opposed to the average of 60 minutes.

The entire boiling process can last up to eight to t10 hours, before being fermented for seven to eight days.

Following the fermentation process comes the dry hopping process, which generally lasts a few days. The batch will then sit in a “brite” tank for no longer than 15 days to mature and clarify before being prepared for the tasting room.

If a success, the creation process begins for Craig Gilbert, who works in the tasting room and hand draws the art that is on the cans and tap handles. Before you know it, a new, hoppy, craft beer is available in local bars and liquor stores.

While NEBCO offers many different types of beers from lagers to ales, their most popular and often purchased product remains to be the Sea Hag IPA which occupies 80 percent of their brites.