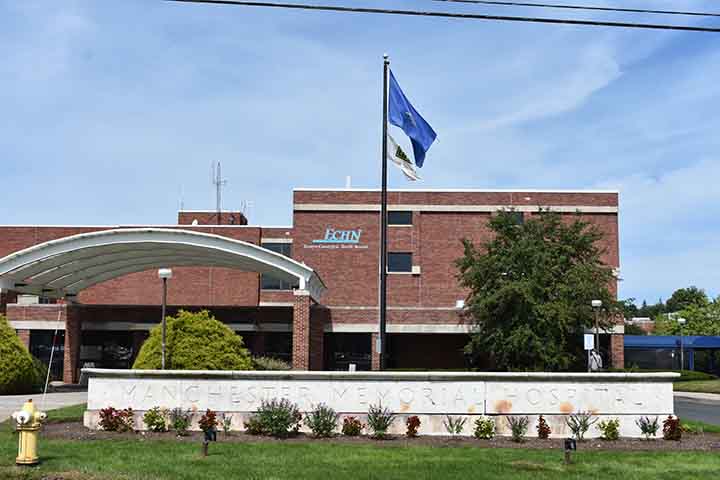 Sidney Jones , a journalism student at Southern Connecticut State University, reported this story in 2018 as part of Journalism Capstone coursework on World War I. 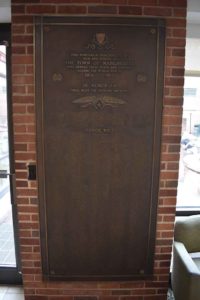 One of the bronze plaques in the lobby of the Manchester Memorial Hospital. The plaques honor the 45 Manchester residents who lost their lives and also all those who fought in the first World War. (Sidney Jones)

The Manchester Memorial Hospital was built through support from residents to honor locals who fought in World War I.

“The persons instrumental in its establishment were: C. Elmore Watkins, Horace Cheney, Miss Mary Cheney, Mrs. Maytie Crowell and Dr. D. C. Y. Moore,” stated Dave Smith in an email, the curator and board member of the Manchester Historical Society. “$130,000 was raised by public subscription within one week from 4,000 donors. Cheney Brothers of Manchester added $65,000.”

According to the 1924 book, “The History of Manchester Connecticut” by Mathias Spiess and Percy W. Bidwell,50-bed hospital was dedicated to those who served in the war on Nov. 11, 1920.

“It was built as a result of the flu epidemic of 1918 when Manchester had no medical facility like a hospital,” Smith stated. “It continues to be the only hospital in Manchester.” 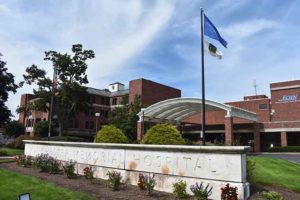 The Manchester Memorial Hospital, Monday, September 17, 2018. Built in 1920, the hospital was made to honor those who fought in World War I (Sidney Jones)

Located at the corner of Hayne and Guard streets, the lobby of the hospital has two bronze plaques. At the top of the first plaque, it reads, “This hospital is dedicated to the men and women of Manchester who served their state and country during the World War of 1914 to 1918.”

The first 45 names at the top of the list are of the soldiers that lost their lives during the war. The rest of the names on the plaque honor the other Manchester residents who fought in the same war.

Spiess and Bidwell described the hospital originally having Georgian-style architecture, with a brick and limestone.

Originally, the public wards could only hold between 24 to 36 people. The maternity wards could serve up to 12 people. The X-ray, delivery, operation and plaster cast rooms were all on the top floor of the hospital. According to Spiess and Bidwell, the hospital had treated 1,010 cases in the year 1922, with a daily average of 36.

Today, the hospital has expanded to 527, 224 square feet. According to the American Osteopathic Association, it now has 259 beds and 50,000 emergency room visits per year.

In addition, hospital services include wound care, surgery, diabetes care, gynecological surgery, heart and vascular care. The hospital was under the Eastern Connecticut Health Network, a healthcare system for towns on the eastern part of Connecticut. 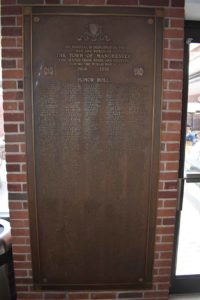 The second bronze plaque in the lobby of the Manchester Memorial Hospital. The plaques honor the 45 Manchester residents who lost their life and also all those who fought in the first World War (Sidney Jones)

“Two years ago it was bought out by Prospect Medical Holdings, an out-of-state corporation which converted it from a nonprofit to a for-profit operation,” said Smith.  “It is now known as Prospect ECHN.”

In 100th year anniversary of the end of World War I, the Manchester Memorial Hospital still serves Manchester, and the surrounding communities of East Hartford, South Windsor, Bolton and Glastonbury. Smith said the hospital has become more important for helping and saving lives.