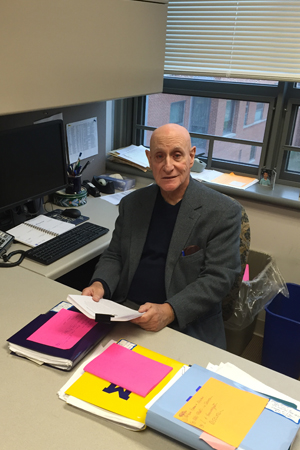 ‘A lot of people are scared of online education’ 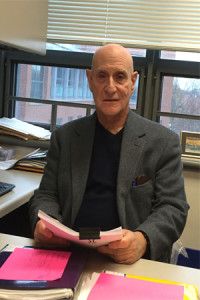 NEW HAVEN—Looking back and studying the biggest events and changes throughout history is what Richard Gerber, Ph.D does for a living. But when taking a moment to go back and look at his own history, it takes him a minute. He sits back in his chair in his office at Southern Connecticut State University where he has been teaching for over 25 years. He reaches his hands up, rests them on his head. He exhales as he takes a few seconds to collect his thoughts on what he has seen change the most over his lifetime.

“It has got to be the widespread use of computers,” Gerber says sitting at his desk with a computer just to his left. “Not so much the (smart) phone even, although that is a computer. But that has revolutionized how people relate to each other. We don’t converse as much, but on the other hand every piece of information you have ever dreamed about is accessible in a second. That’s dramatic to me.”

According to the United States Census Bureau, the computer use in United States households has gone from 15 percent from 1989, up to 75.6 percent in 2011.

Just a few minutes before talking about the wide spread use of computers, Gerber finished sending an email to one of his graduate students about reviewing his thesis. This is the impact the use of computers has had on Gerber.

“It changes the way people relate to each other. You can see five people at the dinner table and they are all texting,” said Gerber. “I think we are more fragmented because of it, maybe isolated in some ways. On the other hand for older people who have grown up with conversation and for whom interaction face to face is the way you are supposed to do things. It still remains, we haven’t lost that.”

Gerber was born in April 17, 1937 in the Bronx in New York where he lived for 16 years before moving to Philadelphia and then Detroit. Gerber attended the University of Michigan where he earned all three of his degrees; bachelors, graduate, and doctorate.  Gerber said he has been teaching since he got his first job in his time in graduate college in 1959. Throughout those many years of teaching, computers have worked their way into the classroom and Gerber has embraced the change but not let it overwhelm the students.

“I look my students in the eye; they can use their phone if they want to. I’m not going to tell them they can’t look at their phone in class, that’s stupid,” said Gerber. “But for the class I was just in, I asked them to create a research topic and I would like a source or two they are going to use. Don’t use the internet. Actually go to the library. But they didn’t listen; I got a lot of sources back with a lot of ‘http’s and ‘www’s, and I said you guys don’t listen! Now 100 years ago when I started teaching they didn’t listen because they didn’t write down the assignment, so that’s not different.”

Now while Gerber might not want his students to do all of their research online, he has no problem with the internet becoming its own classroom.

“I teach online at Charter Oak as an adjunct. Those courses are all online,” said Gerber. “They use BlackBoard, they all speak to each other and post their views and I will jump in with the discussion from time to time.

“A lot of people are scared of online education; they say it takes away from us looking at each other, which it does. But it’s not going to abolish the classroom,” said Gerber. “If it weren’t for the online nature of my class, they wouldn’t be in school. They work 30 hours or 40 hours, work two jobs, or have kids so they can’t come to school, so that is a blessing to me. If you want to talk about a more educated population, a lot of people can’t go to school physically but they can technologically, so that’s a good thing.”

Gerber points out a lot of positive benefits that come from having new technology. He has two children who are both college educated, and now has two grandchildren as well, but they don’t live near him.

“When I talk to my kids we use Skype or Facetime, we can still see each other, sort of if it works right. We couldn’t do that before all you had was the telephone. Now I’m not that old to remember when there wasn’t even telephones,” said Gerber jokingly.

Now while some effects have been seen from the spread of computers as Gerber talked about, he also thinks technology is going to keep advancing and nobody knows what will come from it.

“I think it’s yet to be determined where that (computer) revolution goes,” said Gerber. “There’s going to be more of it. You are going to wear it on your wrist, it’s going to be in the frames of your eye glasses, there’s going to be a microchip in your finger somewhere. Who knows! Ten years from now it could be possible. Who would of imagined what we have today 10 years ago.”

“I think one of the effects is life feels like it has sped up some. Now it wasn’t always good in the past to be so slow when it comes to making decisions or communicating. The good ole days a letter to get over to Europe could have taken a week. Now it takes a second,” said Gerber. “I just hope I’m around another 15 to 20 years to see how all of it turns out, because I think by in large it’s a very positive change, and it’s sort of fun. I’m not a real tech guy but I get it and I can do pretty much what most people can do.”

Gerber is looking forward to the future to see what comes next, and he said he has always embraced the changes that have come in the past.

“A lot of older people always say ‘Oh it was better back then,’ a lot of people think that. I do not,” said Gerber. “That constricts your imagination and your capacity to adjust to change. I don’t know if I will always think that but I do now and I will continue to.”