‘The way (white people) treat you is better’ 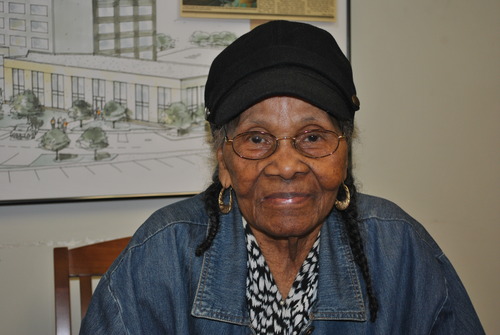 Joyce Lanier, 83, on the change she’s seen in her life./Hannah Spreckley

‘The way (white people) treat you is better’

“He (Jonny’s friend) started talking to me real nasty,” she said, “and Jonathan, he went and he grabbed him, and he shook him and he said, “Don’t you ever talk to her that way – we don’t talk to Joyce like that.”

Lanier, an African-American, worked in white families houses, cleaning and raising their children most of her life.

“And I just felt so good, I just grabbed him and hugged him and kissed him,” she said. “He was just like my son — he still is today – I just love him.”

Lanier had strict rules about making sure shoes were not left in the living room, and Jonathan was good at sticking to it. But when she asked the young boy visiting from Washington, D.C to move his shoes, she was met with hostility. She said her son, as she called him, knew what not to do because she raised him – his mother never looked after him or did anything with him, Lanier said.

“The way they (white people) treat you is better,” Lanier said about the changes she’s seen in race relations. “They look at you now like you’re a person, an individual, a human being, and not that you’re just someone to pick up behind me.”

Lanier, 83, was born and raised in Waco, Texas as a Baptist Protestant. She moved to New Haven, Connecticut in 1956 after marrying a young man who had relatives in the area. Her husband was in the Army and served in the Korean War. When she was younger, she worked in the cotton fields in Texas until she was old enough to begin looking after white children. She said these were the only jobs available to African-Americans at that time. Lanier and Jonathan still keep in touch to this day and he visits her. He is 68-years-old now, she said.

“Well I was a person who loved children so it didn’t matter to me too much,” she said. “I loved them. I thought they was my little kids.  I felt as if they were a part of me, even though they meant nothing to me biologically.”

Lanier said racial tensions slowly began to ease in the late ‘60s, ‘70s and ‘80s. Her grandchildren live in North Branford and she noticed all their friends are white, yet they all get along so well. They graduated from high school and went to college.

“It was different but it was nice,” she said about the success her grandchildren have had. “I’ve seen a time that wouldn’t happen.”

Lanier said she doesn’t see color – she sees a human being with different hair and different complexions.

Being exposed to two different states around the times of racial segregation, Joyce drew some conclusions about the two states.

“They throw rocks and hide their hands,” she said about Connecticut.

Her experiences left her feeling as though Connecticut residents were just as hateful, but they tried to hide it from plain sight, whereas Texans were open and honest.

“Malcolm X said he would rather live with a (wolf), than to deal with a sly fox,” Lanier said as she compared Connecticut to Texas. “Because you would never know what they’ll be up to, but a (wolf) is open, he’s going to let you know what he’s up to.”

She said Texas is an honest state and the residents will tell you how it’s going to be, which she loves because she is the same way.

“We knew we were black; but I never felt that hatred (in Texas),” she said.

One time when she lived in Connecticut, she recalls a visit from her mother as she warned her, “Mama, it’s different up here than it is in Texas.”  They were walking down the street and her mother moved off the sidewalk as a white man approached them. Lanier never moved and told her mother she doesn’t have to do that.

When Jonathan was 13- or 14-years-old, Lanier would tell him to get dressed on Sundays and come to church with her, even though he was Jewish. She would see him walking down the hill to meet her on Division Street, and it would make her so happy, she said. In Connecticut, the segregation was obvious she said. Black people would sit in the back of the bus, and white people would sit in the front.

“I never paid that much attention to it – I knew it was there – but it never affected me in any way,” she said.

“I just never really felt like I had done something bad to someone else.”