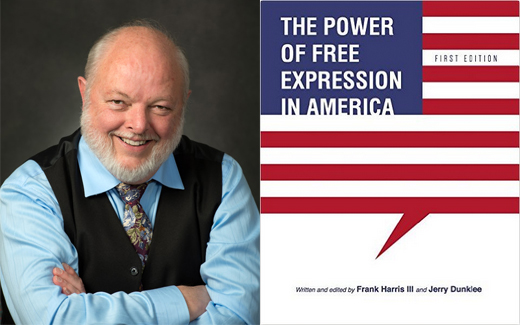 Professor Jerry Dunklee has been granted a research and writing sabbatical leave for January 2017 to interview experts, research and write about the issue of freedom of religion guaranteed in the First Amendment.

He intends to produce a series of podcasts about the legal rights concerning religion and to expand the religious freedom chapter in the book, “The Power of Free Expression in America,” which he co-wrote with Prof. Frank Harris.

“Much of the published material about religious freedom in the country is highly opinionated commentary that supports a single, limited interpretation of the ‘establishment clause’ or the ‘free exercise’ clause,” Dunklee says. “Sorting through the extraordinary volume of commentary is a daunting task and can lead people, who aren’t aware of actual court rulings and precedents, to dangerous misunderstandings.”

An example is the belief that this is a “Christian nation.”

“Actually, the Founders represented several faiths and some were agnostic or atheist,” Dunklee says.  “Thomas Jefferson was a ‘deist’ who rejected ‘organized’ religion. Students, and all citizens, should know how the courts have interpreted these powerful clauses, rather than be susceptible to the extensive misinformation and distortion publicly available.  This is a vital area of American life. The issues are complex and controversial.  All citizens can benefit from more thorough knowledge of the role religion has and does play in the United States.”