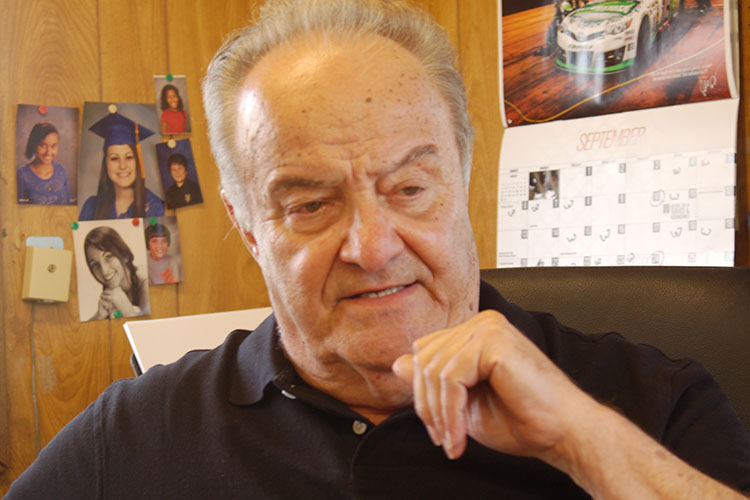 ‘If I was black I would feel the same way’

NEW HAVEN, Conn.– As police chief, Nick Pastore set out to change the face of the New Haven Police Department from foe to friend with community policing.

Pastore at his place of business — the Car E.R. in Fair Haven.

Pastore’s concept of community policing impacted the city of New Haven and the nation. His gentler approach to policing made New Haven a hub for change, driving the police department and the black community to join forces in the fight against crime.

“It’s not so much of what I did or what the system did, it’s what the people did,” Pastore said. “The people were poised, they were graced, and they were sitting and sometimes people make the mistake and they think black people like crime and violence. They don’t. They are like white people–they don’t want it either. But nobody would listen to them. Nobody opens the door and says come on in.”

But, before Pastore could open that door he had to gain some understanding over the people he was to police. That understanding came years before his time as chief.

As Pastore came of age in the 1950s, racial tension was at its highest in America between whites and African-Americans. The “us against them” mentality was in full effect for both sides, with few taking the time out to understand the other’s perspective. For Pastore, understanding came in the form of one young girl amongst eight others, America dubbed them the Little Rock Nine.

In 1957, while in the military, Pastore was assigned to escort one of the Little Rock Nine, the first African-American students to enroll at the racially segregated Little Rock Central High School. There in Arkansas Pastore got his understanding and a front row seat to racism in America.

“I said ‘What the hell is going on?’ I’m a Yankee? ‘Nigger lover go home’ is being shouted to me and I thought that was a baseball team. I’m young and I’m intimidated. I’m scared,” Pastore said. “Their crime was they were black. Most of the protestors, the white men were silent. But, the women, they were up front and they were young Southern women. And now, when you get the backdrop of what you told us about the African-American and black people, now you want my kid to go to school with them? See, I could simply tell you that this is racism at its worst, but I dug deeper. It is not racism at its worst. It’s parents, especially mothers, protecting their children, based on what you’ve condition me to be. I blame the government big time for creating this type of environment,“ he said.

“The U.S. Supreme court said black people are chattel, they’re property, they can be owned. That’s the U.S. Government’s Jim Crow laws and what have you. So, what am I supposed to think of black people if the government is saying they are inferior?” Pastore said.

There in Little Rock the color lines blurred for Pastore. For him, it became less about color and more about people. He wanted to help people—white or black. That mentality stuck with him all the way to the steps of the NHPD.

Pastore was appointed in 1990, then mayor, John C. Daniels, the first African-American mayor of New Haven. At that time, violent crime was at its highest, the Uniform Crime Reports show that New Haven averaged about 2,622 violent crimes annually from 1990 to 2000.

“Most of the calls for service in New Haven and many of the main cities come from African-Americans,” Pastore said. “They are calling the police to come into their lives because they’ve got a situation that they can’t reconcile and they are looking for help and how you deliver that help is the challenge. If you deliver it in a kind, caring, respectful, understanding way, there is a response that takes over the situation. It’s not black or white anymore, it’s taking care of a problem,” he said.

Pastore’s gentler approach to policing, was not the lay of the land at the time; he would have to lead the way.

“When I was police chief in the ‘90s, I was going to set the example of what connecting means and I had a tough transition because my department was all brawn, no brains. So, I started doing the meetings and what have you. I’d take my jacket off, short sleeve shirt, no body guards, no gun, and walk the streets.” he said. “Everyone in the command staff of my police department, individually, would come up to me in a whisper and say ‘Chief, you got to be careful at night when you walk around, you’re going to get hurt.’ I said ‘Do you realize what you just said? That the police chief can’t walk around New Haven? What are you doing about that?’ That’s what I would tell them. They cowered and I don’t mean it despairingly; it’s understandable. They’ve been taught to go in groups of people, SWAT operations every day and what have you. Beat up those people. They felt comfortable doing that, they enjoyed it. They’d go and party afterward,” Pastore said. 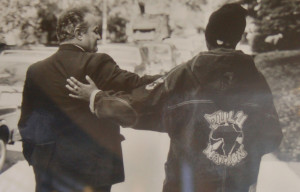 Pastore with New Haven youth in the 1990s.

Uniting the police force and the community, especially the African-American community would prove to be no easy task. Pastore, a white Italian, would have to first gain their trust.

“You’re distrusted automatically. You have to overcome that,” Pastore said. “If I was black I would feel the same way. I would want a black person. But, what I found out through the years was that doesn’t solve the problem. You’ve got to deal with the caring and using that bully pulpit the right way and unfortunately most of us don’t in the business of government and police and what have you. We’d rather control.”

Pastore abandoned the bully tactics and opened a dialogue between the police and the black community. He heard them and he understood what they were going through. He actually cared about them and they knew it.

“The African-Americans have been disenfranchised from day one and to invite them in to be part of the solution was amazing, was a revelation, was an epiphany. They’re ready, willing, and they say thank you in so many ways,” Pastore said.

During Pastore’s tenure, violent crimes continued to drop almost year after year. In 1994 and 1996 crime rose from the previous year, however, both years had more than 1,000 less violent crimes then before he signed on as police chief, according to the Uniform Crime Reports.

Pastore left an everlasting impact on policing in New Haven and across the nation. The NHPD’s mission statement still mentions community policing to this day. Although, that hasn’t always been the case since Pastore’s departure in 1997.

Community policing came to a halt in 2009 when then-police chief James Lewis introduced a new mission statement. Lewis stated at a press conference that police officers did not understand what community-based policing meant and he wanted to give them a “clearer focus.” His approach—“targeted activity policing.” 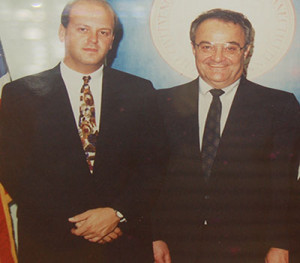 Nevertheless, community-policing made its return in the form of Police Chief Dean Esserman in 2011. Esserman helped establish community-based policing, working under Pastore as his assistant chief in the ‘90s. Esserman says that Pastore was his mentor.

“He’s cerebral. He’s intellectual and those types of people are usually pains in the ass, like professors who know everything. But, they do bring some good to the table,“ Pastore said about Esserman.

“In the business of policing, you’re never known for being cerebral or brainwork. That’s another thing that kept us down we couldn’t keep up with social changes. It’s more brawn. Community policing in totality is more brain, less brawn,” he said.

Pastore brought change to the New Haven Police Department. His friendlier approach to policing opened a dialogue between the police force and the community, ultimately building trust between the two. As a result, crime dropped making for a safer New Haven.

“I’ll always thank and respect and never forget the enjoyment of working with New Haven residents,” Pastore said. “ I give them all the credit. All I did was help bring it out. That’s all I did. I believe there is good and not so good in all of us. Bring out the good.”