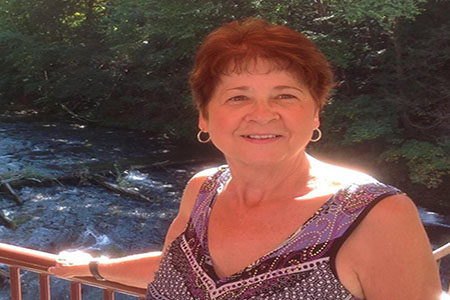 It was a big culture shock, but we loved the culture

SUFFIELD, Conn. – Standing up in front of family and friends, Carol Garcia took a deep breath and prepared herself to do something she’s never done before.

Garcia read aloud the words from an essay she wrote for her English composition class at Asnuntuck Community College back in 1983.

“A small mattress on a cold, tile floor. A bare lightbulb hanging from the ceiling. Whitewashed walls. The sun shining through the wooden slats in the window. These were the things I was acutely aware of as I opened my eyes on that day so long ago, but I remember them as if it were yesterday,” Garcia wrote in her essay.

Garcia, 75 and a mother of two, said she wrote the essay about when she lived in Spain for three years. For her, it was the most dramatic change she had seen in her whole life.

“The only person I’ve ever read that essay to was my husband,” Garcia said. “So this was the first time everyone got to hear it.”

Garcia was only 20 in 1964 when she married her now deceased husband, Michael Garcia. He was a musician in the United States Air Force band, which stationed him in Village Torrejon Air Base in Spain. She flew over to be with him.

“I had never flown in a plane before. My mom and dad took me to McGuire Airforce Base and dropped me off and said ‘See you in three years,’” Garcia said, laughing. “And I was 20!”

Recalling wonderful memories about nights in Madrid and eating delicious food, Garcia said it wasn’t so bad staying there during the beginning of her marriage.

“It was a big culture shock, but we loved the culture,” Garcia said. “I remember driving around Madrid at 10 at night, going to bull fights, and seeing all the places where the band played.”

Garcia said she and her husband traveled to many different places in Spain. They visited Costa del Sol, Guadalajara, Valencia, Granada, Seville, Malaga, and Oviedo.

Spain wasn’t only just nice views and great food. According to Garcia, she experienced some real hardships while learning to live on her own in a completely new country.

She was 23, she said, when she had Donna, her first child. Four years later, she had her second child, Michael, in the United States. There were a lot of differences between the hospital care in Spain and the United States.

“I went into labor in a military hospital, and I didn’t know who my doctor was because it was just going to be whoever was on duty at that time,” Garcia said. “So I went in and had her.”

Garcia shared a room with another Spanish lady who was having her third child. Her name was Mrs. Diaz and she was married to an American service man. She ended up having a baby girl, just like Garcia.

“When Donna was born, she was jaundiced, so they had her under the lights and had patches on her eyes,” Garcia said. “I didn’t really get to see her much.”

Finally one day, Garcia said the doctor told her she could go down and get her baby from a window.

“They didn’t bring us anything. We just had to go to one window and get the baby. We had to get everything and carry it back to our beds, even the baby formula, because I didn’t breastfeed,” Garcia said.

Too busy looking at the cute baby she was holding, Garcia said she didn’t realize she had picked up the wrong baby.

“I didn’t even realize until Mrs. Diaz told me that I had her baby,” Garcia said. “That’s when I looked down and saw her baby’s name on the little tag. So we switched them right there in the hallway. What did I know? She was my first kid.” 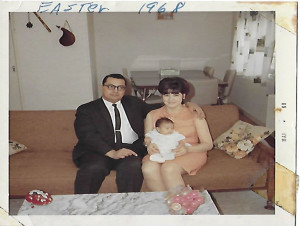 Garcia said in order to feed her child, she had to bring Donna all the way up to her room and then all the way back down once she was done. She also had to go get her own food when she wanted to eat.

When Michael, Garcia’s second child, was born in Virginia, they brought everything to her in the hospital. She said she barely had to leave her bed.

Having her baby in a completely foreign country with no family around, she said was terrifying.

“I had no baby shower,” Garcia said. “I had a Sear’s catalogue that I ordered onesie’s from and other little things. We had no furniture. My husband came home one day with a crib and a mattress he bought for $10 from somebody in the apartment complex.”

Not only did Garcia and her husband have their first child in a new country, but they also had their first Thanksgiving.

Garcia said she first flew to Spain in August of 1966 and that November she tried cooking a Thanksgiving dinner.

There were a lot of single guys in the band who couldn’t go home for Thanksgiving, so Garcia said she decided to invite them over to their place for dinner.

“All of our meat was shipped from the states frozen. We couldn’t buy meat on the Spanish economy because it wasn’t safe. So I had this little oven and a two burner gas stove and that was it. I took my tape measurer and I measured the oven to see what size turkey I should get that would fit in,” Garcia said.

Unless Garcia got her meat from the U.S., she would not have been able to get it in Spain.

Not knowing the turkey would get bigger once it thawed out, she went to the base and got the “perfect sized” turkey.

“Once I got home I noticed the turkey looked bigger, so I tried pushing it in and it wouldn’t fit,” Garcia said. “I started crying and I said ‘What am I going to do I can’t cook the turkey!’ So I made spaghetti and meatballs.”

A few years later on New Year’s Eve, when Garcia was pregnant with her firstborn, she said that experience wasn’t any better.

“My husband was playing at the Officer’s Club and I decided to stay home alone,” Garcia said. “All of a sudden I heard this scratching at my front door. I opened the door and there was this huge rat just sitting there, so I slammed the door.”

Garcia said she sprayed some rodent repellent under the door, but the rat kept on scratching at the door.

“I didn’t have a phone so I couldn’t call anybody and the neighbors across the hall went out to a party, so it was a little after midnight when they finally came home,” Garcia said.

“I went out onto the balcony and told them there was a rat up here. They brought up a stick and I heard them banging it around. When I finally went out, there was a huge pile of wood shavings. The rat was trying to get in. I almost went into premature labor!”

Now, Garcia lives in Suffield close by to her youngest son, Michael Garcia, with his girlfriend, Lisa Ruth, and his two twins Alex and Abby. Carol said she likes to spend her free time with her grandchildren. Over the summer, she said she would take them on trips to the zoo and Six Flags.

Looking back at these crazy experiences, all Garcia can do is laugh. She said she definitely learned a lot from living without her parents those three years in Spain.

“I wouldn’t want to do it now, being that young. We didn’t have much and were really poor,” Garcia said. “But I wouldn’t trade that for anything. It was a wonderful experience and I had a lot of fun.”