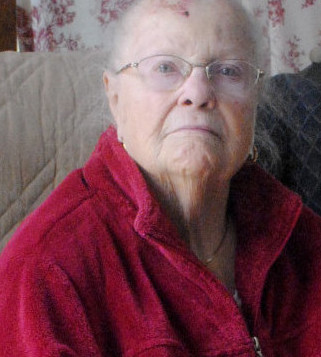 ‘I used to tell my children every night…’ 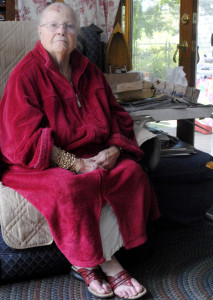 Shirley Blood sits in an old recliner directly across from the living room television. Beside her, a dinner tray is stacked with magazines which over flow to the coffee table that she props one leg on. It’s one thirty in the afternoon but she’s just eaten breakfast, clad in her nightgown and red house coat. She’s been sitting here daily since 1993, the year she retired from her job at Connecticut Hospice. But this place she calls home in Branford, Conn., has been her home for a long time.

“I used to tell my children every night when they said their prayers before bed: Thank God everyday that you were born in America and that you are white,” she said.

She goes on to explain why she would make such a statement, the main idea being that her family was very privileged to have what they did. But it took hard work and dedication to get to that point.

Shirley, or ‘Nommie’ as most people know her, was born on Dec. 11, 1927 in Bristol, Rhode Island in the backseat of her father’s brand new car. This year she will turn 87.

Her parents came from large families, her mother was the youngest of 10, her father one of 15, but Nommie was the eldest of just two. Her family moved with her father’s job to Naugatuck, Conn., when she was 9 years old.

Her parents were blue-collar workers. “They’d pass each other,” she said. One working days, the other nights, dividing the responsibility of family evenly.

Immediately after high school, Nommie headed off to continue her education in a three year nursing school. Nursing became the career that she would come to love for the rest of her life. In her final six months of school, she began working at Waterbury Hospital. Her starting wage was only one dollar per hour, with an extra 12 cents added on when she worked the night shift.

“That’s where I can remember the first change I’ve seen compared to today, at Waterbury Hospital,” she began. “Never once did I tend to an African American.”

In a town now known for it’s diverse culture, it was here that Nommie began her first job as a registered nurse. “I grew up among racism, I grew up with the word nigger. I could still see the segregation back then.”

Another significant change she has seen and appreciated the most is the power of being female. “Woman are finally recognized as leaders,” she said.

Back when she set out in her career, most jobs asked if you were married or engaged to be married. Many woman stopped working after they wed, their destiny was to become a homemaker. Nommie, however, went into a career that was predominantly a woman’s job at the time and worked through marriage, divorce, and the birth of her family.

“Medicine has obviously advanced, they don’t care what it is, they have a pill for it,” she said. “Nursing is all about visibility, having the right answers, and being there for your patients, but it’s all mechanical now. The thought of actual bedside nursing is gone.”

In the last ten years, Nommie’s health have deteriorated and she has gone through several operations Her biggest being open heart surgery in 2013. The $90,000 surgery was serious, but it left her with a new valve and anti-clotting medication.

She remembers sitting in her hospital bed all by herself, without her family around to visit everyday, she would’ve been alone. The nurses would come in every now and again, carrying computers or punching text into their portable phones. They cared about her, but not much more than her health. It’s the time she has spent at the hospital since she’s retired where she has began to see the most significant changes.

“There’s no bond. I used to sit there and hold my patients hand when I was a nurse, I asked them if they were okay, how their pain was, and what I could do for them. Now the nurse walks in checks your vital signs, gives you your meds. It’s lonely in there.”

Shortly after graduating as valedictorian from nursing school, Nommie married and became pregnant with her first child. In the next ten years she gave birth to five more and eventually found herself kneeling in front of her priest. With a tinted screen dividing them, she wasn’t there with much of a confession, but she needed guidance. She didn’t want to have children anymore, but the options of the church were not in her favor.

“I knew that the only way to stop having children was contraceptives, but they weren’t as accessible back then and it was a sin in the church,” Nommie said. “He said that I would basically be shunned from the church if I turned to birth control.”

Up until 1968, contraception was considered a deliberate violation towards God’s design. The Catholic church referred to procreation, the natural purpose of sex. The pleasures were what Catholics believed to be a gift from God, but with those pleasures came the possibility of new life. It was a sin to deliberately exclude the basic purpose of sex and therefore birth control was strongly looked down upon.

“So what did I do? I gave birth to my sixth kid, went to the doctor, and didn’t attend church again for 13 years,” Nommie said.

In 1969 she packed up all six kids and moved from the valley to a four bedroom house on the shoreline in Branford, Conn., the place she still calls home today. Her recliner sits besides the sliding doors along the back living room where she can look out at the water of Long Island sound between the trees of her backyard.

At the age of 32 she started as the night supervisor at Connecticut Hospice.

“It was a $5,000 pay cut, but I couldn’t be happier with that job. I loved talking to the patients, we would set up cots so their families could spend the night with them. Patients never left hospice, they came to us so that they could die comfortably; peacefully.”

“Hospice was also closer to home. I separated from my husband in the early 60s. It was important for me to be there with my children, I wanted to work but I wanted to be with them.” she said.

Nommie loved her job. She said she stills keeps in touch with her former co-workers to this day by going out for lunch together every few weeks. She said that most people would say they don’t miss a job, they miss the people, but she misses everything about working as a nurse. She retired in 1993 at the age of 66 and started to care for her young grandchildren.

“Families used to be large, but now many people are having one or two children, sometimes none at all because of how expensive it has become. People are living farther and farther apart. We had no entertainment back then, we found joy in going over to each other’s houses every weekend. Telephone technology has also changed. From rotary phones and party lines, to the 20 pound mobile phone I would carry around in my car. Now people barely use house phones, they talk on their smartphones or carry around iPads and computers everywhere they go.”

“Right now I live in my own house with two of my daughters, it doesn’t belong to me anymore, it belongs to them. I think that it’s difficult to be alone, but I’m lucky to have my eldest who stays home with me. I enjoy her companionship.”

“I’ve watched the price of everything sky rocket, everything is so expensive now,” she said. “Food is so modernized, if it doesn’t come in a can it’s frozen. And everyone wants to be educated, people have student loans up to their ears. Gas was eleven cents a gallon when I started driving, you could heat your house with oil for fifteen cents a gallon,” she said.

“I was a good mother. I went to work, worked hard, tried to educate all of my children the best I could. I loved my life.”