‘I put my thinking into the future’ 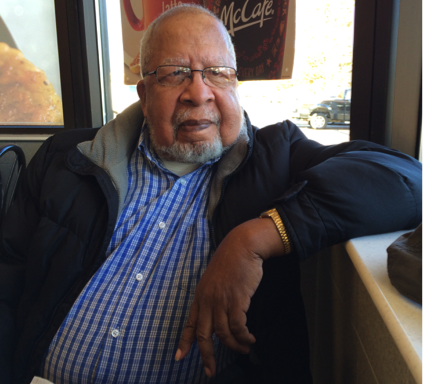 ‘There has to be change … to have progress’

HAMDEN, Conn. – Although he said it’s rare to hear an “old guy” voice his support for progress, 80-year-old Lewis Myrick said he accepts and looks forward to changes in his world.

“I put my thinking into the future,” he said. “I don’t believe in maintaining the status quo or hanging on to old ideas. Change is a good thing.”

Myrick, who moved to Hamden in 2010 after spending 40 years in New Haven, said most of the people he associates with share his optimism regarding change, but not all senior citizens.

“Some older people are more resistant and get upset at change,” he said. “We have to accept that there has to be change in order to have progress.”

Myrick said the most significant change he’s seen in his lifetime has been the progression of technology, specifically the integration of computers into everyday American life. He said he was immediately intrigued upon their introduction to the public.

“I was amazed at how information could be obtained through the use of a computer,” Myrick said. “I wanted to understand them, so I took computer courses.”

Myrick said computers have caused the largest overall change in American society because their “invention and subsequent advancements” led to advancements in other fields. Having retired 17 years ago from being a packaging manager for a manufacturing firm, he said he was only able to experience the “very early stages” of computers’ newfound role in the workplace.

“At work there were so many things that we had to do by hand that just aren’t necessary now,” Myrick said. “The manual labor previously required has now been replaced or made easier by computers. A job that used to require four people to complete now only requires one person and a computer.”

Upon computers’ integration into the workplace, their use increased dramatically. A 1991 survey conduced by the United States Census Bureau showed that computer use among adults at work rose from 25 percent in 1984 to 37 percent in 1989. Myrick said he knew “right from the start” that computers would play a large role in everyday life going forward.

“I didn’t think it was a fly-by-night invention,” he said. “I always felt they would become as big a part of our lives as automobiles. You look at the invention of the assembly line and how that changed American life; I thought computers would follow the same path.”

Myrick said resistance to technological change comes from a lack of understanding by certain members of the population. More specifically, he said many people haven’t had the opportunity to fully experience technology because of financial difficulties.

“For many, they have to choose between paying $350 for an Apple notebook or paying their fuel bill,” Myrick said. “But in the future, I believe those less fortunate will be able to afford these items because the prices always come back around.”

The tendency of products’ prices to fall once they are no longer “new,” he said, will help financially challenged Americans to take advantage of devices such as laptops and cell phones.

“I remember buying my daughter a desktop computer for $1,400 when she first entered high school,” Myrick said. “Now I go into Staples and I’m amazed at the low prices of desktops.”

The Census Bureau survey showed that computer use doubled among those with a college-level education, compared with those who only possessed a high school diploma. Myrick said technological advancements have resulted in heightened qualifications for industrial jobs.

“When I was younger, an entry level factory position’s only requirement was graduation from high school,” he said. “Today, you’re seeing more qualified, college-educated people getting those same jobs.”

In addition to an increased in qualifications, Myrick said another challenge facing working Americans is outsourcing. He noted that many jobs in the manufacturing industry have opened up overseas because of companies’ ability to lower labor costs.

“Not everyone is going to have a college degree,” Myrick said. “But if products are continuously going to be shipped overseas and then back home for sale, you have to blame corporate America.”

He said experience and connections can improve one’s chances, but the lack of domestic production of goods hurts those pursuing work in the manufacturing industry.

“It’s difficult today to see clothes that are made in America. Almost every label you see says ‘Made in Taiwan’ or ‘Made in China,’” Myrick said. “And most cars are assembled and have their parts made in other countries.”

According to the Bureau of Labor Statistics, as referenced in a 2013 Consumer Reports magazine article, the U.S. lost almost six million manufacturing jobs between 2000 and 2010. As stated in the article, the average hourly salary for a manufacturing job in America was $34.74 in 2010, compared to $1.36 in China, and “even lower hourly compensation” in India. Myrick said he’s drawn similarities between the people working in factories overseas and post-Industrial Revolution workers in America.

“The same type of workers who helped industrialize America are now needed overseas,” he said. “There was once a large group of extremely hardworking individuals who helped American businesses grow to the levels they’ve reached today. Now that they’ve produced and advanced to a certain point, they’re looking to cut costs, and the people being recruited for foreign labor are just as driven as we were.”

Myrick said he believes the U.S. economy will come full circle, and jobs will eventually return home. This will create openings for people who “don’t have the ability or resources” of their more educated competitors.

“I think we’re going to see the return of the blue-collar worker,” Myrick said. “Maybe it won’t be exactly how it was 30 to 40 years ago, but it will come back.”

And as technology continues to improve, Myrick said, there will still be “certain jobs computers just can’t do.” He added that he envisions technology advancing at an increasing rate.

“There are so many things today that from that time I was born, I never thought would be in existence,” Myrick said. “And if you asked me the same question 20 years ago, I’d have said the exact same thing.”