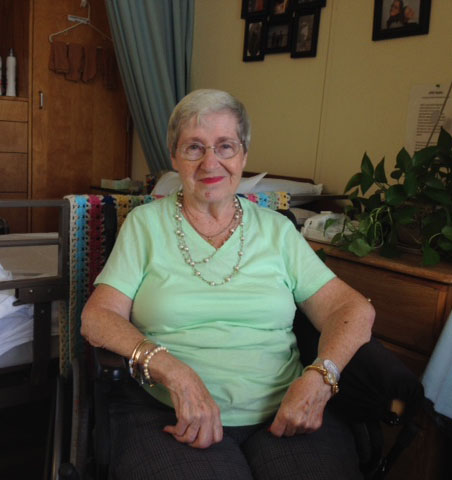 ‘What about the child’s Right’

SHELTON, Conn. — Barbara Charles has seen many changes in the last 81 years, however, there are two that have always stood out. The biggest and saddest change Charles has seen is abortion becoming legal. She said society uses these different types of words like “women’s right to choose.” In Charles eye’s, abortion is still an act of murder. She would never think she would live to see the day abortion became legal.

“What about the child’s right?” said Charles. “The child does not get a say in abortion at all.”

Charles also believes that abortion is not a painless death for the child. She said she believes since technology has advanced so much with the use of an ultra sound, one can see the unborn child swimming around in the womb.

“If you can see that the child is moving and lively inside the womb, one can predict that the child can feel the whole thing.” said Charles. “I do not believe it’s painless at all.”

Charles said she would rather see people of today’s generation have the baby and give it away to someone hat can take care of him or her. Not everyone is blessed to have a child, so why take that chance away from the women who cannot? In earlier years, she went into nurse training for three years and became an RN for seven years. She stopped nursing after she had her children to take care of them.

One other topic comes to mind when relating back to some of the changes Charles has seen over time. Charles explained while she was growing up, kids were not really as coddled as much as they are today. There were no such things as a snow day. If it snowed that day, it did not matter. Whatever the situation was, the students had to come to class.

“It’s amazing how (the state) cancels school at the drop of a hat,” said Charles.

Charles also said that while in the classroom, every student was well behaved. If a student went out of line for whatever reason, the student was disciplined right away. The principal, she said, had this paddle with holes in it. If the teacher sent a student to the office, the person would be paddled. Not only would the student be paddled in school, the student would most likely be struck by the parents when coming home from school. Discipline has decreased greatly over the years, but Charles said she feels like students’ behavior has changed greatly over time. No student ever yelled out the answer in class like today. They always raised their hands in order to answer the question.

“People were very mannerly and respectful, which is sad that it isn’t that way today,” said Charles. “For that, I am sorry students are not like that anymore.”

“People always say it’s so tough today,” said Charles. “But there were a lot of different worries back then.”

One example that Charles talked about was how people at a young age would get around town. There was only one car that was available to the families, but it could only be the fathers’ car due to the father always having to work. The cars could not have been given to teenagers. Charles said she would have to walk to get where she had to go with no bus stops at the time.

“Everybody walked to school,” said Charles. “People just got so used to walking.”

When Charles was 16, her father wanted her to learn how to drive, which Charles said was such a blessing to be able to learn at such a young age.

She was married by the age of 23. When she gave up nursing to take care of her children, she decided to work with her husband in the family owned restaurant. Charles and her husband then worked together for the next 25 years.

After everything Charles has done in life, she now resides in Bishop Wicke Health Center in Shelton, Conn. She decided to come to the nursing home because it was not possible for her to be home anymore. One major reason was because Charles was having a hard time walking. Moving into the health center, she said, was one of the best decisions she ever made. However, her family was not so happy with the decision.

“My family was mad at me for making this decision,” said Charles. “In time, they understood why I decided to do so.”

Charles enjoys every second residing at the home due to the way that the nurses treat her and all the fun activities that take place. She has made a lot of friends during her time. she said a person can’t just sit in his or her room and mope around that person has to just live.

“If you can’t be home, (Bishop Wicke) is second best,” said Charles. “But there is still no place like home.”

Charles also gets to see her family. Two of her children live in Connecticut. Her daughter cooks dinner every Sunday for the whole family. The family comes down to Bishop Wicke and has Sunday dinner together. This get together has been going on for the last five years.

If there was one way that Charles wants to be remembered it was for being kind hearted and helpful as she can. She does not like to mistreat others and loves to be helpful at any chance she can. Charles believes

every person deserves respect and no one should be mistreated no matter whom that person is.

Charles believes the changes in abortion and behavior and children have changed her life growing up. Regardless of these two negative aspects in her life, all the positives made Charles learn so much in the last 81 years.

“My husband and I had a very good life,” said Charles. “I had a great life.”