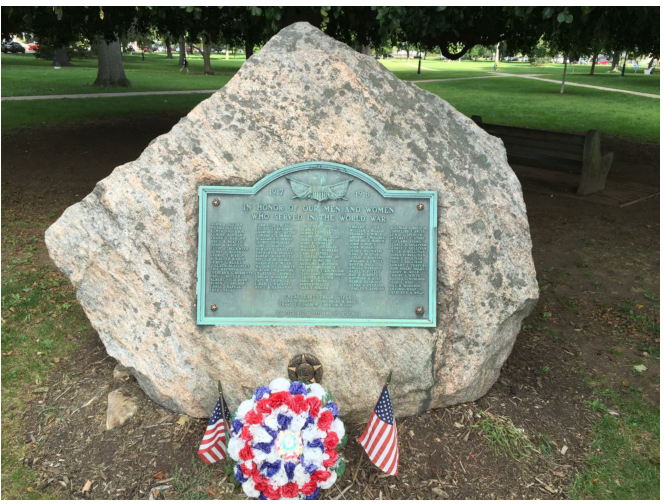 Josh Falcone, a journalism student at Southern Connecticut State University, reported this story as part of Journalism Capstone coursework on World War I.

Tucked in the southern end of the Guilford Green is a the large granite stone with a bronze plaque affixed and two freshly placed American flags beneath it.

The 6-foot-wide by 5-foot-high cut stone with the bronze plaque honors the 103 men and women that fought in the first World War, including four who died in battle, Frank H. Bishop, Charles F. Darrow, Herbert H. Hall and Burton M. Lee.

During the Great War, an honor roll designed by artist Charles Hubbard included 84 names and was topped by a eagle statue, according to Penny Colby, the former assistant director of the Guilford Free Library and current president of the Friends of the Library. Colby, who created a presentation on the town’s role in World War I,  said the original honor roll was 13 feet wide and 11 feet tall and was lighted at night.

In 1931 Guilford decided to create a stone monument, according to the June 2, 1932 issue of the Shoreline Times. The monument was dedicated on Nov. 12, 1931. Private funds were used in the effort.

According to Colby, there are four women listed on the monument, Agnes T. Carlson, Alice B. Hanrahan, Bertha Miller and Hazel A. Potter.

“Some of them are listed, but many are not,” Colby said.

There is not a lot of information on many of the men and women that were involved in World War I that are honored on the monument and Colby called that “frustrating” and “strange.”

Colby said she would love to find out more about William Conway.

“(Conway) fought with the Guilford Battalion in Mexico. Then they came back here. Then he went to France, and then he came home, went to Norwich, where he died in the ’20s,” Colby said. “It was shell shock, they called it then.”

She is also interested in the story of Rufus Walter Bishop, who shared a shelter hole with Cpl. Alvin York in Chatel Chehery, France.

York would go on to perform one of the greatest feats of World War I when he took out a German machine gun nest, killing 28 German soldiers and capturing 132 in the Meuse-Argonne Offensive in France on Oct. 8, 1918 earning him the rank of sergeant and the Medal of Honor.

Bishop told the Hartford Courant in a Feb. 23, 1920 story that he first met York at Camp Gordon, Georgia in 1918, and spent the night with him before York’s heroics, but had never heard the full story until it was written about in the Saturday Evening Post in April 1919.

Bishop said to the Courant: “One can be at the heart of the cyclone yet never know who else is involved. And rapid action prevents quiet reflection.”

The World War I Monument shares the Green with eight other war monuments including four of similar stone designs for the Revolutionary, Spanish-American, Korean and Vietnam wars.