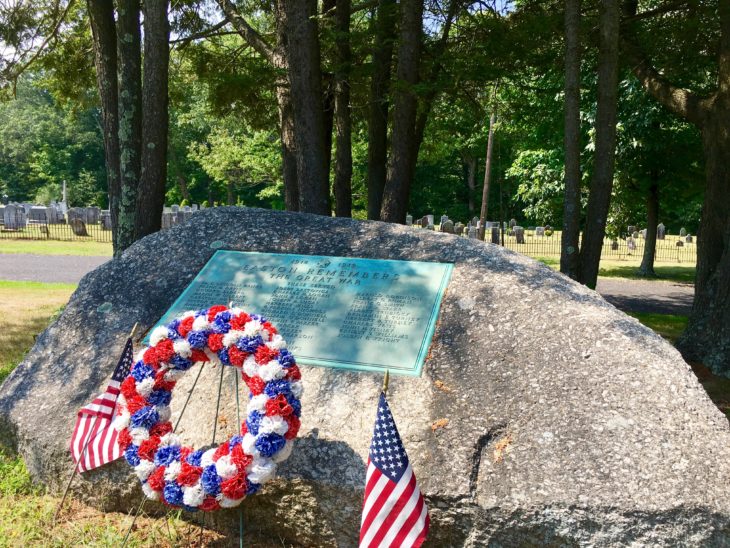 Ali Sorbara, journalism student at Southern Connecticut State University, reported this story in 2017 as part of Journalism Capstone coursework on World War I.

Before Easton’s World War I memorial boulder, there was a wooden sign.

The townspeople first erected a wooden sign at the end of the Great War in front of the Congregational Church as dedication to the 35 residences who served, according to the book “Easton – Its History,” by Helen Partridge and Francis Mellen.

Thirteen years later, town members voted to pay $400 to place a boulder as a new monument in front of the Union Cemetery.

The granite boulder sits at the intersection of Stepney and Sport Hill roads, down the road from the Congregational Church, where its original predecessor stood. In the center of the memorial, a bronze plaque lists the 35 residents who served.

Easton Historical Society President Chester Burley said the group has no records about the boulder.

However, town records from 1931 show the expenses for the boulder, indicating it was cemented and established in that year.

The Rev. Amanda Ostrove, of the Congregational Church, said authors Partridge and Mellen were members of that church during the time of World War I.

“Mellen is actually a descendant of the first minister of this church,” said Ostrove. “And files indicate that generations of both families are still members here.”

Between the years of 1918 to 1925, there was no appointed minister of the church. During that time, Yale divinity students would run the worship and substituted the position, Ostrove said.

“Not having a minister for that long kind of shows how difficult the time had been during the war,” Ostrove said. “It’s almost as though the state of the church’s clergy somewhat reflected what challenges Connecticut was undertaking.”

Due to the lack of clergy, there are no detailed church records that could indicate the exact date the sign was erected.

“The town didn’t own the church property at the time that sign went up,” Ostrove said. “That could also be the reason for a lack of records.”

Ostrove said that a church clerk is appointed and held responsible for the note taking and filing of church meetings and happenings, something the church lacked during that time.

“What typically happens with church records when you don’t have a clergy person is there are none,” said Ostrove. “And by none I mean there’s basically one page per each year that only specifies who joined, financial standings, and employment records.”

Brainerd McGuire, a member of the American Legion Post #143 in Fairfield, said the association is responsible for maintaining the memorial boulder.

“We veterans didn’t unify as the American Legion group until the end of World War II,” McGuire said. “But ever since then we’ve been responsible for taking care of it.”

McGuire said there’s no plan to change the monument, nor is there an annual cost to maintain it.

“We’re the ones who put the flowers and American flags in front of it,” McGuire said. “We don’t consider that a cost because we’re happy to do it, we want to.”

McGuire said being a veteran himself has taught him the importance in remembering those that have brought our country to where it is today.

Click here to see more facts about the monument.