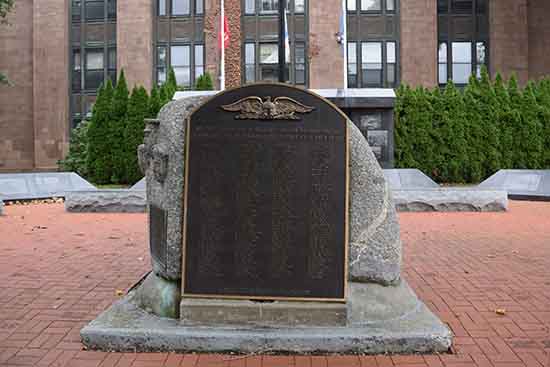 Sherly Montes, a journalism student at Southern Connecticut State University, reported this story as part of Journalism Capstone coursework on World War I.

Called a disappointment when it was first erected, the World War I monument in Bridgeport has served as a reminder of those who died sacrificing their lives for the good of the country.

The monument has been on the McLevy Green since it was erected on Oct. 29, 1933.

The original memorial was a bronze plaque Honor Roll which listed the names of those who fought in the war and it hung in City Hall.

The updated monument present today was created by an Italian man, Thomas A. Sabatino. His granite monument was referred to as a “hunk o’rock.” It was called a disappointment by city officials, veterans and citizens, according to newspaper archives from The Bridgeport Post, in the years 1937 to 1950.

The monument is a large granite boulder with three heads protruding out of the right side and the original bronze Honor Roll is on the front face of the boulder. The Honor Roll features a total of 212 names; the names belong to the men and women who served in the war. 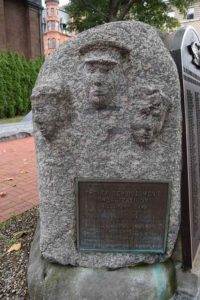 The memorial was criticized mainly for the fact that it is granite that was unnaturally formed to look like a boulder, has three heads on the side which represent the division of the military, and it was just not seen as a visually pleasing or beautiful monument.

There were many citizens who petitioned to have the memorial remade and the mayor of this time, Jasper McLevy, was quoted in The Bridgeport Sunday Post of Nov. 28, 1937.

He said, “I never thought much of it, but how are we to rid ourselves of it? We haven’t gotten anything else, and no one has offered a substitute.”

It was also stated in the May 16, 1939 archives that McLevy had unofficially indicated that he was in favor of a new monument to replace the one that had been created.

Sabatino was a stone cutter who was employed at the Department of Public Works at the time.

“I just happened to think it. I didn’t expect all this when I began to work,” said Sabatino in The Bridgeport Sunday Post of Nov. 28, 1937 about his creation from 1933. 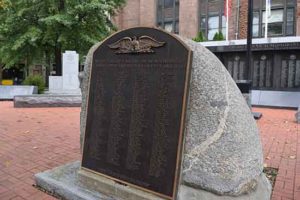 According to the newspaper archives provided by the Bridgeport History Center, the only change that has been made is that it was moved over to a different side on the McLevy Green.

Elizabeth VanTuyl, worker at the Bridgeport History Center in the Burroughs-Saden Public Library, said it is important to remember and keep track of events such as World War I. She also said keeping track of public records and historical documents is essential.

The Bridgeport History Center’s mission is to, “collect, preserve, and make available for research materials that document local history.”

“The local history collections are good for understanding the present day,” said VanTuyl. “Bridgeport has a patchy history with historic sites such as buildings, but there are people who are interested in the historic preservation of these sites. People like to see how things looked in the past and how they look today.”

View more photos of the monument on HistoryPin.com.