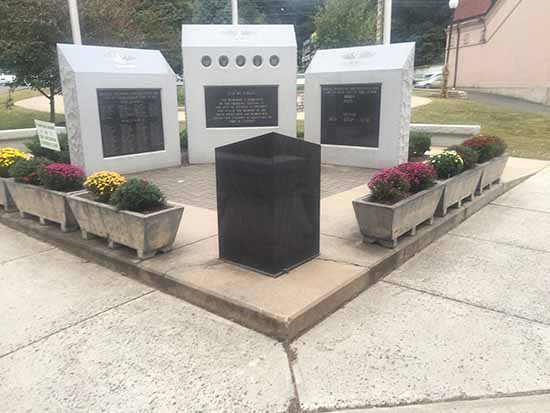 Wes Crowell, a journalism student at Southern Connecticut State University, reported this story as part of Journalism Capstone coursework on World War I.

When Ansonia decided to create a monument honoring war veterans in the late 1990s, the city turned to local and regional newspapers for help.

The city asked the Valley Sentinel and the New Haven Register to post a list of names, and ask readers to add to it from among those they knew who served.

The roster of veterans is now posted on three granite blocks in Veterans Memorial Park, adjacent to Ansonia City Hall on Main Street. The monument was dedicated in 1999, and replaced a generic monument honoring all veterans.

The center block is the tallest, at 8 feet high, and contains the description: “Lest we forget. This memorial is dedicated by the grateful citizens of Ansonia to preserve and honor the memory of all those brave men and women who served our country so selflessly in time of conflict.”

Among the features of the slanted carved rocks is an eagle clutching an olive branch. The stones weigh 12,000 lbs.

The park and monuments were designed by Decarlo & Doll Inc., which in the 1990s handled many of the city’s projects. The WWI honor roll features 32 names carved into black granite.

Prior to being called Veterans Memorial Park, it was known as Malus Park.

To see a full list of the names on the memorial, click here to open a PDF file.