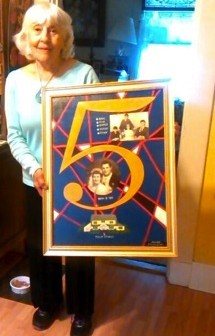 All the girls talked about was getting married 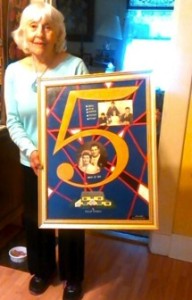 Matilda Degradi holds up her picture of her family

NEW HAVEN, Conn. – The paintings had been on the wall for so long, it was as if they had grown right out from it.

“She only had one doctor you know,”  said Matilda Degradi.

She pointed her wrinkled finger to a black and white photo of her mother that hung small, lost in the maze of the massive paintings on her living room wall.

Degradi, a painter from Brooklyn, N.Y., said the lifestyle of women from her mother’s time, to her time, to her daughter’s time is the most significant change she has seen in her 85 years. One major difference is the longer lifespan that people live due to the technology in medicine and doctoral practices.

Degradi is a cancer survivor. She drives to several doctors every couple weeks to get checked in to order maintain her healthy active lifestyle. In her old age, she still attends a water aerobics class every week.

“My mother never had this luxury,” said Degradi. “She died at a young age, in her 60s, it was normal for people in those times.”

Degradi, whose mother is one of the few women to actually work in her time, said she was very lucky to have a mother that was a dress maker.

“It made a difference with me and my brothers because she was home with us all the time and we got to see what a working woman looks like.”

Degradi said that was something that helped her brothers grow up to value women and their contributions to the workforce, unlike other men at the time.

Most women stayed at home and took care of the home and their children all day. They did not go to work and they did not have to worry about paying for things.

“That was for the fathers,” said Degradi.

Although she made some money being a dress maker, Degradi’s mother, like most women at the time waited for their husbands to give them the money so they could buy the necessary things for the home. They could not really work because they had to stay home with their children.

“Today women don’t need men to make the money for the family,” said Degradi. “They can take care of themselves.”

Degradi said her daughter always planned to get an education and have a career while growing up.

“Education and a career was always her first priority,” she said.

She remembered when she was a teenager, all the girls talked about was getting married and all they did was do just that, have kids, and raise a family.

“There were more women working at my time than my mother’s but neither is comparable to what it’s like now,” said Degradi.

She said her family lived a very simple lifestyle growing up in Brooklyn. She and her two brothers were the first in her family to be born in the United States after he parents moved from Italy in the 1920s. It was a time right after the Great Depression when Degradi and her brothers grew up. Like many families in America, they didn’t have much. The lack of luxury made her appreciate what she did have even more.

On the other hand, one thing she said she couldn’t get enough of was books; something her mother did not have. As a painter, Degradi’s home is filled with many art pieces including paintings, sculptures, and other works of art. However, the number of books in her home tops all of that.

“Growing up I only had one book in my house,” she said, as she slid her fingers across the low bookshelf, a smile lighting up her face. “Now I have lots of books everywhere.”

With the access to not only books, but also technology, Degradi said her mother would have loved to have such information.

“But my mom wanted to be American.  When I would bring home books she would try to read them in English.”

The original plan for Degradi’s mother and father was to come to the United States in order to work for a few years and then leave.

“They were only supposed to come here and work and then go back to Italy. Then they had a baby, my older brother, and stayed here. Their life changed.”

When Degradi’s older brother was born, being a mother became the main focus of her life. She later had Degradi and another son later on.

“Back then it was all about being a mother,” said Degradi. “Today women are not just focused on that, but on working, and enjoy the same equalities and opportunities as men.”