‘They aren’t as friendly nowadays’ 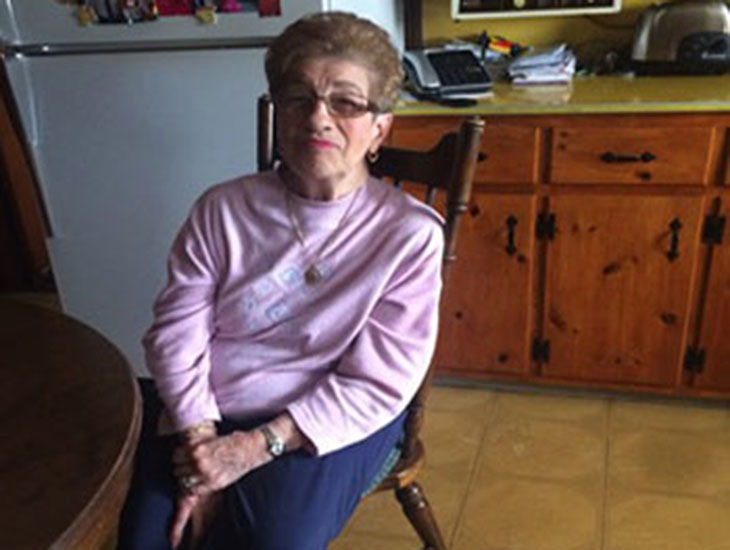 ‘People are not what they used to be’ 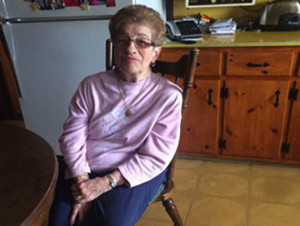 Carmella Mansi, 82, in her home in Hamden

HAMDEN, Conn. – At her kitchen table Carmella Mansi sat with a big white refrigerator with family photos plastered all over it standing in her background.

She had a smile on her face as she told stories of her childhood on the morning of Oct. 11. Not even the unfolded laundry on her counter could steer her away from the memories of playing outside with her childhood friends. It wasn’t until she got up to fold that her smile disappeared as she recalled a heartbreaking memory; one that would later reflect the biggest change she’s seen.

In 2005, her great-niece Lindsay Ann Burke was murdered by her then boyfriend in Rhode Island at only 23. Mansi said their relationship was toxic as the boyfriend was abusive to Burke.

Born on Jan. 26, 1933, Mansi said that events like Burke’s death were very uncommon in her early years.

“That just didn’t happen back then,” she said. “If it did, it was a tragedy.”

It was a morning of happy, childhood memories suddenly derailed by a tragic recollection. Mansi said that time had changed and that in her 82 years, with all of the changes in the world, the one that stuck out the most was a decrease in a nice and neighborly attitude.

“People are not what they used to be, let’s put it that way,” she said. They aren’t as friendly nowadays, not as neighborly.”

Mansi lived in New Haven a majority of her life. She grew up in Wooster Square. Her parents immigrated to the United States from Minori, Italy. She was one of six children. She said it was normal for families to have multiple children and that most of the children around the neighborhood were like her in the sense that they too came from big, Italian families. They grew up together and invited each other to parties and even each other’s weddings.

“They invited us and we invited them,” she said. “We were very close.”

From her time in grammar school at what was then called Columbus Green School to her high school days at Wilbur Cross, she couldn’t remember a time that she wasn’t with her neighborhood friends.

“I used to come home from school and go bicycle riding, roller skating with my friends,” she said. “That was in grammar school. Going to high school, we used to meet down on the New Haven Green on the corner of Church and Chapel and I used to walk from where I lived way down Wooster Street, pick up one girlfriend and then we would walk down further and pick up some other kids and all walk to school. It was nice.”

She said she and her friends walked from Broadway to the Water Street Bridge area everyday before school and just had fun. She said it was “nice, clean fun.”

“My mother used to give me money for the bus but we used to pick up kids and have fun on the way to school,” she said.

Growing up in the 1930s going into the ‘40s, Mansi said she didn’t see too many cars on the road. The first one she could recall was at the age of 5 during the hurricane of ’38 but cars were rare, which allowed the children to play outside in the street.

She said New Haven wasn’t as spread out as it is today. Due to the lack of technology to communicate with, she was only allowed to play within sight of her kitchen window so that her mother could keep an eye on her. And like many children, she had to be inside before the streetlights came on.

“You were too afraid to go anywhere because you knew your parents would yell at you,” she said.

She let out a small laugh as she spoke about her childhood friend Rosie, who would let her ride on the back of her bike because Mansi’s mother wouldn’t allow her to own one of her own because “it was dangerous.”

“We didn’t have that many toys,” she said. “I used to ride with her on her bike. We had bicycles, roller skates, marbles, and we used to roll up a newspaper, tie it up and that used to be our football. I used to play in the street with that and we would have a lot of fun.”

It wasn’t until Mansi graduated from Wilbur Cross in 1951 and began working at Central Linen that things began to change. While reminiscing about her old neighbors, she pointed towards other houses trying to remember who lived in them today.

She said she doesn’t see too many of her neighbors now because a lot of them are older. Those whom she had grown up with either moved away or have died. According to City Observatory’s report, published in New York Magazine in August 1/3 of Americans have never met their neighbors, whereas in the 1970s, 30 percent of people said they spent time with their neighbors at least two times a week.

It wasn’t until the last 20 years that Mansi started to see a dramatic change in the way people treated each other, but “more so now than ever.”

“Compared to what you hear on the news, I don’t think they are as they used to be,” she said. “A lot of robberies. You never heard that before, you know. We used to keep our doors open. Can’t do that anymore.”

Although Mansi said she feels safe in her neighborhood, it isn’t New Haven that worries her but rather society as a whole.

“I can’t complain but the environment itself, all over, not only here, the whole world is crazy,” she said.

It’s a combination of lifestyle and media that she said is the root of the change. People now work on Sundays, which was uncommon in Mansi’s younger years. She said although her children and grandchildren live in Branford or North Haven, she rarely gets to see them for Sunday dinner. However, when she does, she can’t help but notice that some of them, like her granddaughter Melissa, are always on their cellphones.

It is the selfishness of people and lack of community Mansi said is the biggest change she’s seen. Growing up, she wouldn’t hear of multiple murders or robberies on the news. Events like Burke’s death were extremely uncommon. She said it was a happier time. People made an effort to talk to one another and communicate. Her old neighbors moved out and “new ones came in and they just keep to themselves.” The sounds of the children playing would fill the streets during her childhood.

“I guess life is different today than in my days,” Mansi said. “Times change and people change.”