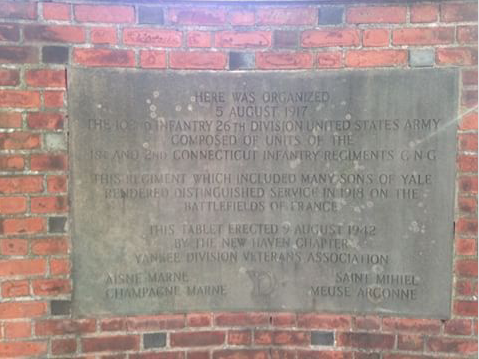 Courtney Luciana, a journalism student at Southern Connecticut State University, reported this story in 2017 as part of Journalism Capstone coursework on World War I.

Flanking Derby Avenue alongside Yale’s baseball and football facilities, a bronze plaque and flagpole commemorate the World War I service of the 102nd Infantry Regiment.

The memorial is situated where the unit once camped during training.

On the north side of Derby Avenue, which is Route 34, sits the 80-foot-flagpole, and on the south side, directly across, is the 51-inch by 33-inch bronze plaque mounted on a brick wall.

The memorial was constructed Aug. 9, 1942 by the New Haven Chapter Yankee Division Veterans Association. The plaque reads: “This regiment, which included many sons of Yale, rendered distinguished service in 1918 on the battlefields of France.”

“The 102nd was primarily from New Haven,” said Kacey. “But men from all over New England fought, so it would be great if more people in the area were educated on the division.” 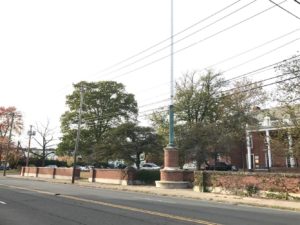 The 80-foot-tall flagpole on the North side of Derby Avenue. Courtney Luciana photo.

Yale gifted the monument to the regiment, according to a New Haven Register article from Nov. 5, 1942. More than 200 people attended the unveiling of the plaque, including Brig-Gen. John H. “Machine Gun” Parker, who was in command of the 102nd.

The ceremony was commenced by the Yankee Division drum corps, led by George R. Tyrell and presided by Frank P. Lee. Bestie Leonard, one of the “doughgirls” of the American Expeditionary Forces, led the singing of the “Star Spangled Banner.”

According to the New Haven Register article, Capt. Philip H. English delivered the dedicatory address to the men and officers of the 102nd.

“High tribute must be paid to veterans of the earlier 102nd,” said English, according to the article, “who went forth to war with the new regiment.”

“Today the 102nd Memorial, 26th Yankee Division still serves as an active National Guard Reserve unit,” said Kacey. “The plaque is the exciting part because that’s where the 102nd would march. I love to show visitors of the museum pictures of the infantry marching right on Chapel Street because it hits how close to home this all occurred.” 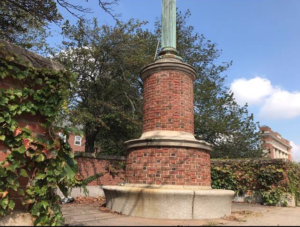 Closer look of the flagpole across the street, from the bronze plaque. Courtney Luciana photo.

Kacey calls “Connecticut Fights: The Story of the 102nd Regiment” the bible of the 102nd Regiment. Capt. Daniel Walter Strickland, the author, talks about the days that the unit camped out on the soccer fields right next to 279 Derby Ave. spending weeks in an exhausting drill and camp routine. In it, Gen. John J. Pershing explains from the autumn of 1917  until early 1918, the unit trained for the battle.

According to NewHavenGrays.org, when the 102nd Infantry returned to Connecticut from battling in France they transformed into National Guard Units on Goffe Street in New Haven.

Mark Arminio, former New Haven Gray from the 26th Division, said he studied the 102nd memorial and believes the two parts should be together.

“You know I think they really need to replace the plaque onto a boulder,” said Arminio. “It does get confusing with the flagpole being connected to Walter Camp Field.”